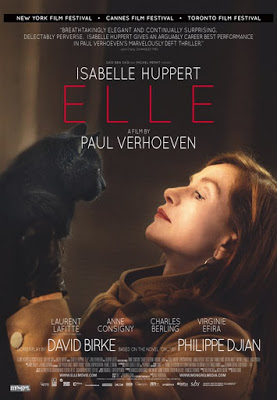 A middle-aged woman with a dark past deals with a sexual assault in her own way in Elle. Michèle Leblanc (Isabelle Huppert) is the head of a video game company, who is one day brutally raped in her home. However, despite the pleas of her ex-husband Richard (Charles Berling) and friends Anna (Anne Consigny) and Robert (Christian Berkel), Michèle does not want to involve the police, partially due to the negative public opinion of Michèle, whose father is serving a life sentence for a series of brutal murders. Meanwhile, Elle develops a flirtatious relationship with her neighbour Patrick (Laurent Lafitte), while also trying to investigate who is responsible for her assault.

A decade after 2006’s Black Book, Paul Verhoeven returns behind the camera for this adaptation of the novel “Oh…” by Philippe Djian. As Verhoeven’s first film produced in France, Elle stars superstar actress Isabelle Huppert as Michèle Leblanc, who quickly turns out to be quite peculiar woman. Moments after being brutally raped on her kitchen floor, Michèle calmly cleans up and goes on with her day. Without a doubt, this isn’t what you would expect by a woman that was just sexually assaulted.

However, it quickly turns out that Michèle has a very complicated life, stemming from the fact that her father was arrested for murder 39 years prior. After a 10 year old Michèle was photographed on the day her father was arrested, many view her as an accomplice to her father’s crimes, with Michèle often receiving insults from random people. In addition, Michèle has the tough job as the head of the video game company, where the (mostly male) programmers are either resentful or infatuated with her. Michèle carries on a relationship with her ex-husband Richard, who is now dating a younger woman, and tries to be supportive of her son Vincent (Jonas Bloquet), who is living with her domineering and pregnant girlfriend Josie (Alice Isaaz).

You know that Elle is going to be a bit of a messed up film when the film begins right in the middle of Michèle being raped, with the scene being repeated a couple times in flashback. However, it quickly turns out that the rape itself is probably one of the least twisted aspects of this story, as Michèle is woman that is already quite disliked by her community. The film contrasts Michèle’s verbal denial of being an accomplice to her father’s crimes with behaviour that can often be described as sociopathic. The film leaves what exactly is going on in Michèle’s head open to interpretation and there are probably multiple different ways to interpret the places the film goes.

While on the surface Elle is about Michèle getting revenge on the person who raped her, when the culprit is finally revealed, it only ends up making the film a whole lot more twisted. Isabelle Huppert in undoubtedly the driving force behind Elle, with her giving an absolutely great performance, as a very independent woman, who often goes what she wants, when she wants to do it. The film is also a fine return for Paul Verhoeven, who is long past the days of Robocop and Showgirls, but still is able to make a compelling film that isn’t afraid to push some buttons. Altogether, Elle is a twisted little story with a pitch black sense of humour.