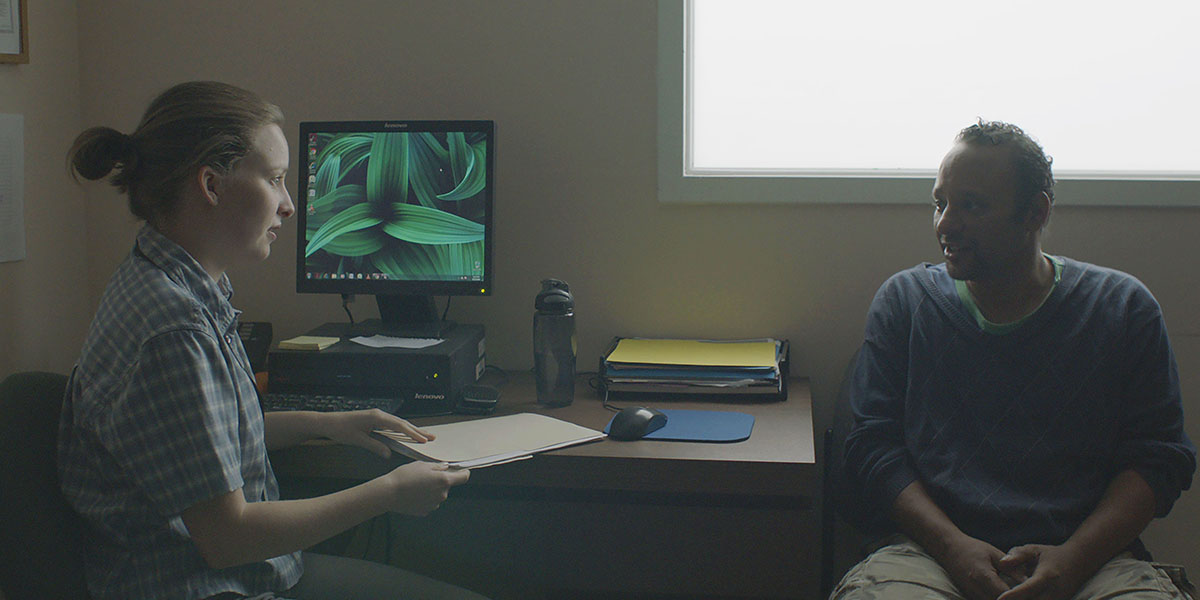 A caseworker works with a man charged with theft in Fail to Appear. Isolde (Deragh Campbell) is a trainee caseworker, who is assigned to assist Eric (Nathan Roder). Eric is a 30-something man, who has been charged with robbing an electronics store. Having already failed to appear at one court date, Eric is set to appear at a hearing and Isolde tries to prepare herself for her meeting with him at the courthouse. When they do finally meet, Eric turns out to be a much different type of person than you were expecting.

Fail to Appear to the feature-length debut from director Antoine Bourges (East Hastings Pharmacy). The film is an intimate Toronto-based story, about the attempted connection being a caseworker and her client. Fail to Appear almost tells two stories in one, with the first half of the film focusing primarily on Isolde, with the narrative shifting towards Eric for the second half. Before they eventually meet at the courthouse, Isolde’s only knowledge of Eric is the various written reports she is given. Before the court date, Isolde tries to get in contact with Eric’s mother, only to be met with a vague and somewhat apathetic reply about whether she’ll appear in court. However, when they finally meet, Eric turns out to be a generally well-rounded individual, aside from some mental health issues.

Fail to Appear is produced by MDFF’s Dan Montgomery and has a similar visual aesthetic to previous MDFF productions, such as Tower and How Heavy This Hammer. The plot of Fail to Appear also reminded me somewhat of 2013’s Short Term 12, particularly the first half of the film, which takes place nearly entirely within the support centre Isolde works at. We learn the details about Eric at the same time as Isolde and in many ways Fail to Appear plays somewhat with the assumptions that can be generated by learning about someone solely from a piece of paper.

It is in the middle of the film where Isolde and Eric’s stories finally converge and we learn about the type of guy he truly is. Despite the fact that he apparently suffers from depression, which is his explanation for missing the previous court date, Eric is shown to live a relatively independent existence in the basement of his mother and stepfather’s house in the suburbs. Even Eric’s crime is given an explanation, which results in you really feeling empathy for him.

Like many MDFF productions, Fail to Appear can be best described as a “slice of life” film, which tells a story over the course of a single day, before deciding it is time to end. Even though the film ends on somewhat ambiguous note, Fail to Appear is a relatively well done look into the social care system and the type of people it tries to help.