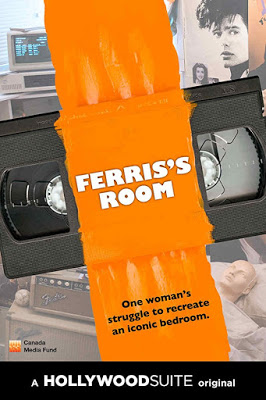 Produced for the cable channel Hollywood Suite, Ferris’s Room is a documentary that sees filmmaker Ryan Mains follow Toronto artist Sarah Keenlyside, as she travels to Chicago to exhibit her recreation of Ferris Bueller’s bedroom. It took Sarah about six months examining still frames of Ferris Bueller’s Day Off to figure out what exactly was in this bedroom and where everything should be. This includes a number of posters that are now out of print, a rare and expensive synthesizer, and other odd props.

Ferris’s Room is a documentary not only about the recreation of this iconic bedroom, but also the cult fandom of Ferris Bueller’s Day Off as a whole. This is seen in the film through the event “Ferris Fest,” which was run in Chicago in celebration of the film’s 30th anniversary. This celebration featured appearances from supporting cast members of the film, as well as Chicago film critic Richard Roeper. Sarah Keenlyside is invited to Chicago to have her recreation of Ferris Bueller’s bedroom be one of the main centerpieces of the celebration. Despite having already having staged the room in Toronto, Sarah has to locally find some of the props she needs and assemble the room mostly on her own, all within a very tight deadline.

There is no denying that there is a huge cult appeal to Ferris Bueller’s Day Off and this recreation of Ferris Bueller’s bedroom must have been amazing to see in person. However, with Ferris’s Room, Ryan Mains takes a relatively paint-by-numbers approach in telling the story of Sarah Keenlyside restaging this exhibition in Chicago, with the film giving a day-by-day account. This is very much a human interest story that is supported by extreme fandom. Ferris Fest looked like it was quite an event and I probably would have better enjoyed an entire film about the event as a whole. I’m not suggesting that Ferris’s Room is not a film that is worth checking out, but there really seems to be a whole lot more story hiding under the surface.

Altogether, Ferris’s Room is a perfectly fine produced-for-TV documentary about one woman’s struggle to recreate an iconic bedroom.