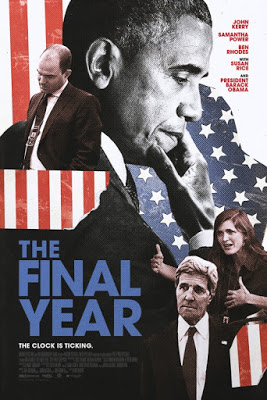 Barack Obama’s foreign policy team are followed during the administration’s final year in office in The Final Year. During the Obama administration final 12 months in office, a documentary crew has unprecedented access as they follow Secretary of State John Kerry, UN Ambassador Samantha Power, and Deputy National Security Adviser Ben Rhodes as they embark on their duties. With the cloud of Donald Trump looming, these White House aides hope that the work they accomplished wouldn’t be for nothing.

Documentary filmmaker Greg Baker (Manhunt: The Inside Story of the Hunt for Bin Laden) gets unprecedented to the White House, as he follows three key members of Barack Obama’s foreign policy team. The three primary subjects of John Kerry, Samantha Power, and Ben Rhodes are all given equal time to demonstrate their role to the administration. This includes Kerry’s work at improving relations with Iran, Powell’s work with the UN, and Rhodes job of writing speeches for Obama. The film also features interviews with National Security Adviser Susan Rice and even Barack Obama himself.

Probably the most obvious comparison to The Final Year is that the film is sort of like a real life version of the TV show The West Wing, except without the Aaron Sorkin written dialogue. The film covers a lot of events to occur in 2016, such a Obama attending a memorial in Hiroshima and the failed attempt at a ceasefire in Syria, which resulted in renewed tensions with Russia.

With The Final Year arriving more than a year after Obama left office, there is sense of irony watching the film, since the Obama administration’s legacy has been all but erased by Donald Trump. In fact, through much of the film the subjects express how they doubt Trump will win the election. It is only towards the end of the documentary that the prospect of President Trump begins to sink in for these White House aides. Probably the most ironic line in the film is John Kerry hoping that the incoming administration would see the importance of what the Obama administration achieved.

I’m not sure what the intentions of Greg Baker was when he set out to make The Final Year and how the context of the film might have changed if Hilary Clinton won the election. The film is still an interesting look at the inner workings of the White House, though the film could have done more to address the looming spectre of Donald Trump, who is all but ignored until it is impossible to do so.