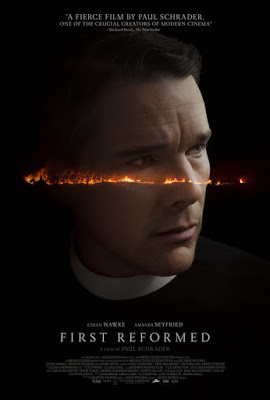 A country priest has a crisis of faith in First Reformed. Reverend Toller (Ethan Hawke) is the pastor of the First Reformed parish, a historic yet poorly attended Dutch Reform church. Toller is approached by Mary (Amanda Seyfried), a pregnant parishioner, who asks Toller to talk to her husband, an environmentalist, whose despair about the environment makes him reluctant to bring a child into the world. This results in Toller, who is reeling from the death of his own child, to begin to doubt the faith that he has devoted himself to.

First Reformed is the latest film from director Paul Schrader, which has him reflecting on his own history with the Calvinist Christian Reformed Church. Reverend Toller has begun taking a journal to put his thoughts to paper, as he learns to cope with the death of his child. At the same time, he is preparing for the 250th anniversary of the First Reformed church, a parish that is often viewed these day more as a historical museum than a place of worship. Toller’s encounters with Mary and her husband results in him beginning to wonder if he is truly following God’s plan for humanity.

Paul Schrader is a filmmaker who is considered a master, primarily because he wrote a number of films for Martin Scorsese, such as Taxi Driver and Raging Bull, back in the 1970s and 1980s. However, after watching The Canyons, Dog Eat Dog, and now First Reformed, I have decided that Schrader is not worthy of the title of master. First Reformed is a film that starts off slow and somewhat boring and ends up being a complete joke, with Toller’s crisis of faith almost played for laughs.

In all fairness, there are some thematic elements of First Reformed that I can somewhat relate with and I can understand the type of crisis of faith that Toller has over the course of the film, particularly in how the church seems to be addressing climate change. However, Paul Schrader addresses this by leading Toller down a dark path and essentially turning him into the second coming of Travis Bickle, which didn’t really sit right be me.

Admittedly, part of my dislike of First Reformed probably comes from its criticism of religion conflicting somewhat with my own personal Catholic beliefs. However, even without the religious themes, First Reformed was a hard film for me to truly get into and by the time Toller and Mary were literally flying together, I was done.