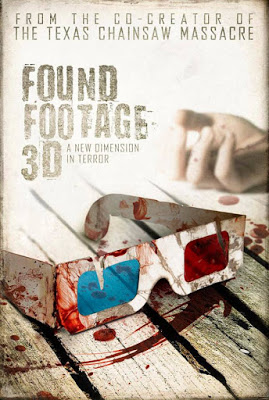 A group of filmmakers setting out to make a found footage film end up being part of one in Found Footage 3D. Derek (Carter Roy) sets out with a group of friends to film a found footage horror film entitled Spectre of Death at an isolated cabin in Texas, while his brother Mark (Chris O’Brien) films behind-the-scenes footage. Wanting this film to stand out from the countless other found footage films, Derek decides that Spectre of Death will be the first even 3D found footage film. However, the story of the film comes to life as strange things begin to happen at the cabin, centered around lead actress Amy (Alena von Stroheim).

Found Footage 3D is a film that is both a new addition to countless number of found footage horror films, while also commenting on the fact that this is a way overused subgenre. Derek is a quite arrogant and self-centred filmmaker, who already believes that his found footage film is going to be the greatest ever, even before he sets out to start filming. Derek adopts a ridiculous 3D gimmick for the film and even casts his ex-wife Amy as the lead, despite the fact that they haven’t quite worked out their issues with each other. It soon becomes apparent that Derek based the script for his found footage film on the real history of the location they are shooting act and soon enough strange things begin to happen on set, which is captured on Mark’s behind the scenes footage.

I am going to start of my stating the obvious – Found Footage 3D did NOT need to be a 3D film. The fact that the film is shot in 3D is a gimmick through and through and there is nothing that the 3D effects adds to the film. Found Footage 3D isn’t even the first found footage film to be in 3D, since it was beaten by 2015’s Paranormal Activity: The Ghost Dimension. However, in some ways, the fact that the 3D element of Found Footage 3D is pretty useless almost adds to the meta commentary on the found footage genre that first time filmmaker Steven DeGennaro seems to be trying to tell with this film.

The actual plot of Found Footage 3D seems to be a merging of elements from both The Blair Witch Project and Paranormal Activity, with the film featuring both shadowy demonic activity and plenty of running through the woods. There are sadly only a few truly chilling moments in Found Footage 3D, with much of the running time taken up by interviews with the crew members, most of whom become fed up with the way Derek is directing the film. In addition the film has an extended cameo by film critic Scott Weinberg, who is a producer on the film.

Probably a good description of the found footage genre as a whole is “if you’ve seen one, you’ve seen them all” and Found Footage 3D is no exception. While the film does try to have a level of self-awareness, including the fact that a 3D found footage film makes no sense, it only serves to bring more attention to the film’s own flaws.