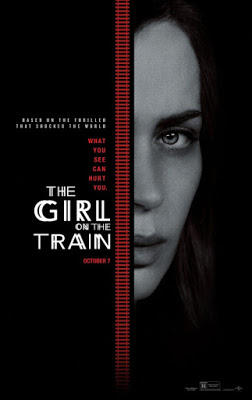 An alcoholic divorcee becomes entangled in a missing persons case in The Girl on the Train. Rachel (Emily Blunt) rides the trains everyday to and from New York, enviously observing the seemingly perfect couple of Scott (Luke Evans) and Megan (Haley Bennett). The couple just happens to live next door to Rachel’s ex-husband Tom (Justin Theroux), who now lives with his new wife Anna (Rebecca Ferguson) and baby daughter Evie.

One day, Rachel looks out the train window and sees Megan seemingly embracing another man (Édgar Ramírez), shattering Rachel’s illusion of Megan’s seemingly perfect life. Following a night of heavy drinking that ends in her blacking out, Rachel wakes up covered in blood and police detective Riley (Allison Janney) arrives to question Rachel about Megan, who has suddenly disappeared. Rachel struggles to piece together what happened the previous night and figure out whether or not she was involved with Megan’s disappearance.

The Girl on the Train begins by introducing the three main protagonists of Rachel, Megan, and Anna. Rachel’s major drinking problem has put an end to both her marriage and career, with her now spending her days as a train riding voyeur. While Rachel believes that Megan and Scott have the perfect marriage, Megan is actually quite unhappy with the union, particularly the pressure Scott bears down on her to have children. On the other hand is Anna, who begun an affair with Tom when he was still married to Rachel and is really concerned with the fact that Rachel keeps hanging around their house.

Like Gone Girl, the story of The Girl on the Train is told non-chronologically, with the film utilizing multiple flashbacks to illustrate the events that lead towards Megan’s disappearance. However, I found myself not really caring for any of the characters, especially as the case is drawn out to include multiple red herrings, before the final third act reveal. However, the film doesn’t really try too hard to hide the reveal and I had things figured out long before the final act, with me actually feeling silly that I didn’t have the whole film figured out from the start.

Even though I was immensely disappointed by The Girl on the Train, I wouldn’t exactly put the blame on the cast, which includes a pretty solid performance by Emily Blunt, as well as decent performances by up-and-comers Haley Bennett (The Magnificent Seven) and Rebecca Ferguson (Mission: Impossible – Rouge Nation). The major problem with the film is the weak script, which demonstrates that perhaps not every successful book should be adapted to the screen.

I can’t exactly say how closely The Girl on the Train follows the original novel, but I can say that something was undoubtedly lost in translation, since if the novel was “the thriller that shocked the world,” the film ended up being “the highly predictable thriller that bored the viewer.”