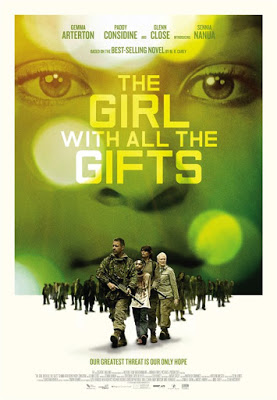 A young girls holds the cure for a zombie outbreak in The Girl with All the Gifts. In the near future, humanity has been ravaged by a fungal disease that has left the population dominated by flesh-eating “hungries.” At a British army base headed by Sgt Eddie Parks (Paddy Considine), research is done by Dr Caroline Caldwell (Glenn Close) to find a cure for the outbreak, which includes experiments on hybrid children, who are still infected with the desire to eat flesh, yet they retain normal human thought. The experiments are frowned upon by teacher Helen Justineau (Gemma Arterton), who develops a close relationship with infected girl Melanie (Sennia Nanua). When the hungries attack the base, Sgt Parks, Dr. Caldwell, Helen, and Melanie go on the run into London.

Based on the 2014 novel of the same name by M.R. Carey, The Girl with All the Gifts is a zombie apocalypse story that also has a human rights theme to it. The story of the film develops through a minimalist first act, which introduces a girl named Melanie, who is one of many children seemingly held prisoner at this military base.

It is quickly established that these children are infected with the same zombie fungus as the rest of the population, but they seem to have a partial immunity that allows them to retain their cognitive functions. Most of the personal on the base look down on the kids as abominations, though Helen Justineau isn’t afraid to treat them like the human beings they are when she teaches their daily classes. When a handful of survivors find themselves on the run after an attack, prejudices have to be put aside in order to reach safety.

Perhaps it is the film’s UK setting, but I got a bit of a 28 Days Later vibe watching The Girl with All the Gifts. While the film does have its fair bit of action, it can be argued that this is not the typical zombie film. Part of the reason for this comes from the character of Melanie, who perhaps holds the key to a cure, even though it would mean having to be dissected by Dr. Caldwell. Overall the course of the film, Melanie demonstrates herself as being very much human, despite having the habit of going into a frenzy whenever she smells flesh.

Much of the running time of The Girl with All the Gifts focuses on the core four characters, with newcomer Sennia Nanua holding her own with Gemma Arterton, Paddy Considine, and Glenn Close. Altogether, the film goes on to show that there are still original directions for the zombie film genre to go.