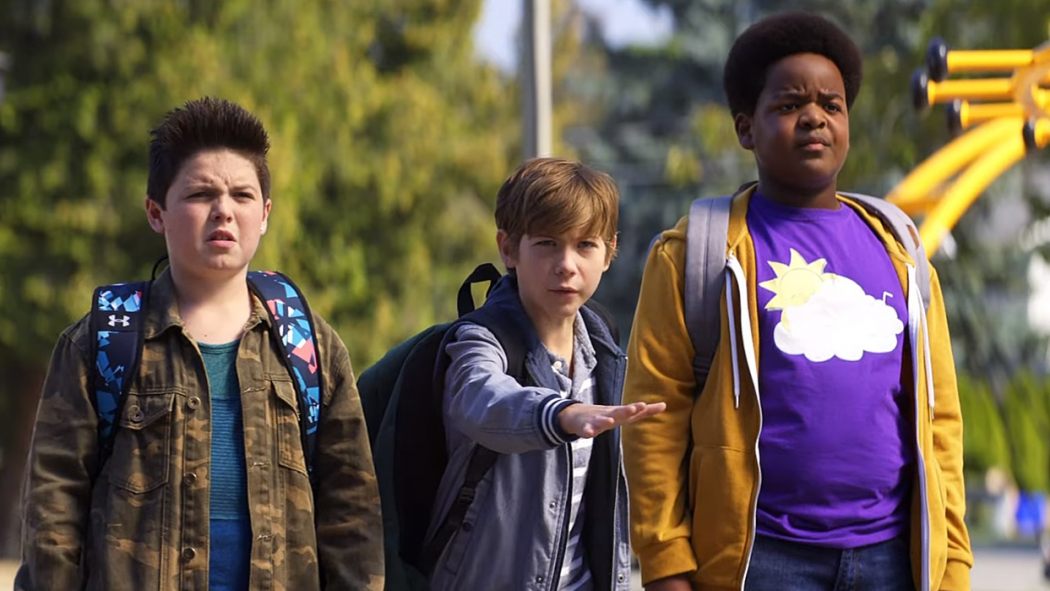 5.6
Good Boys (2019) 1h 29min | Adventure, Comedy | 16 August 2019 (USA)
Director: Gene StupnitskyWriters: Lee Eisenberg, Gene StupnitskyStars: Jacob Tremblay, Keith L. Williams, Brady Noon
Summary: Three sixth grade boys ditch school and embark on an epic journey while carrying accidentally stolen drugs, being hunted by teenage girls, and trying to make their way home in time for a long-awaited party.
Countries: USALanguages: English
Source: imdb.comDisclaimer: This plugin has been coded to automatically quote data from imdb.com. Not available for any other purpose. All showing data have a link to imdb.com. The user is responsible for any other use or change codes.

Three six graders try to recover a drone, so they can attend a party in Good Boys. Max (Jacob Tremblay), Lucas (Keith L. Williams), and Thor (Brady Noon) are three six grade best friends, who get excited when Max is invited by the cool kids to a kissing party, which gives Max the opportunity to kiss his crush Brixlee (Millie Davis). Not knowing much about kissing, Max decides to use his dad’s (Will Forte) drone to spy on his teenage neighbour Hannah (Molly Gordon). However, things go awry when Hannah and his friend Lily (Midori Francis) take the drone, which Max and his friends have to recover before his dad comes home or else they wouldn’t be able to go to the party.

Good Boys is a pre-teen coming-of-age comedy produced by Evan Goldberg and Seth Rogen (Superbad) written by Lee Eisenberg and Gene Stupnitsky (Year One, Bad Teacher), Stupnitsky also getting the directorial credit. The gimmick of Good Boys is that it is a potty-mouthed comedy starring sixth graders, with child actors Jacob Tremblay (Room), Keith L. Williams (The Last Man on Earth), and Brady Noon (Boardwalk Empire) taking the lead roles. The film follows a day in the life of these 12-year-olds, who have to try and recover a drone, while also dealing with bullies, frat-boy drug dealers, and nasty teenage neighbours.

I can almost imagine Good Boys coming about by someone thinking “What if we made a movie like Superbad, but had it starring tweens?” Admittedly, I did find the antics of these sixth graders to be cute and funny at times, but you can only hear kids swear so many times before it starts to get old. Good Boys is probably one of the last major roles for Canadian actor Jacob Tremblay before puberty fully kicks in and he stops being that cute kid from 2015’s Room. Other than Tremblay, the child actor that stands out the most in the film is Keith L. Williams as the always-honest Lucas, who also happens to be coping with his parent’s divorce. Then there’s Brady Noon as Thor, who is dealing with some major self-esteem issues, as a result of constant bullying.

For a film marketed on the fact that the stars themselves are too young to see it, Good Boys is actually a relatively tame film for an R-rated comedy. However, the film still features quite a bit of potty humour and a side plot about how the school musical is Rock of Ages, which definitely turns out to be quite inappropriate for kids that young to perform. Overall, I would say that Good Boys is a fine film, but ultimately a somewhat forgettable one.