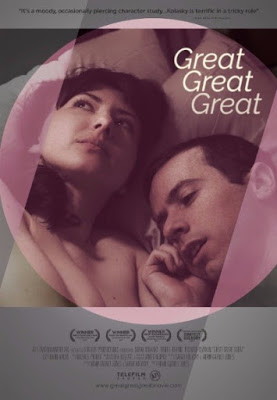 A young woman gets doubts about her relationship after getting engaged in Great Great Great. Lauren (Sarah Kolasky) is a 30 year old woman, who is living with her boyfriend of five year Tom (Dan Beirne). After hearing the news that her parents are divorcing, Lauren begins worrying about her future with Tom. The two of them spontaneously decide to get engaged, however at the same time Lauren reignites an affair with her new boss David (Richard Clarkin), who she had previously met years before.

Great Great Great is a romantic drama that deals with the doubt that often arises in a long term relationship. Lauren clearly loves Tom, but she is worried that their relationship will one day grow stagnant and end just like her parents. Then there is the return of Lauren’s previous flame David, who is able to excite her in ways that Tom is unable to provide. However, Lauren can’t keep this love triangle going on forever and she must choose which man she wants to stay with.

I have to say that Great Great Great reminded me greatly of the plot of Sarah Polley’s Take This Waltz, particularly in how the central protagonist generates doubts about a stagnant relationship and enters into a purely sexual affair. However, Great Great Great is probably a bit more grounded in reality, as Lauren has to face some real consequences to her actions. The film is built entirely around the performance of co-writer and star Sarah Kolasky, who moves in and out of the viewer’s sympathy, based on her actions. Dan Beirne is perfect as “nice guy” Tom, while Richard Clarkin balances the line between charming and slimy as David. Altogether, Great Great Great is a compelling look at the complexities of relationships.