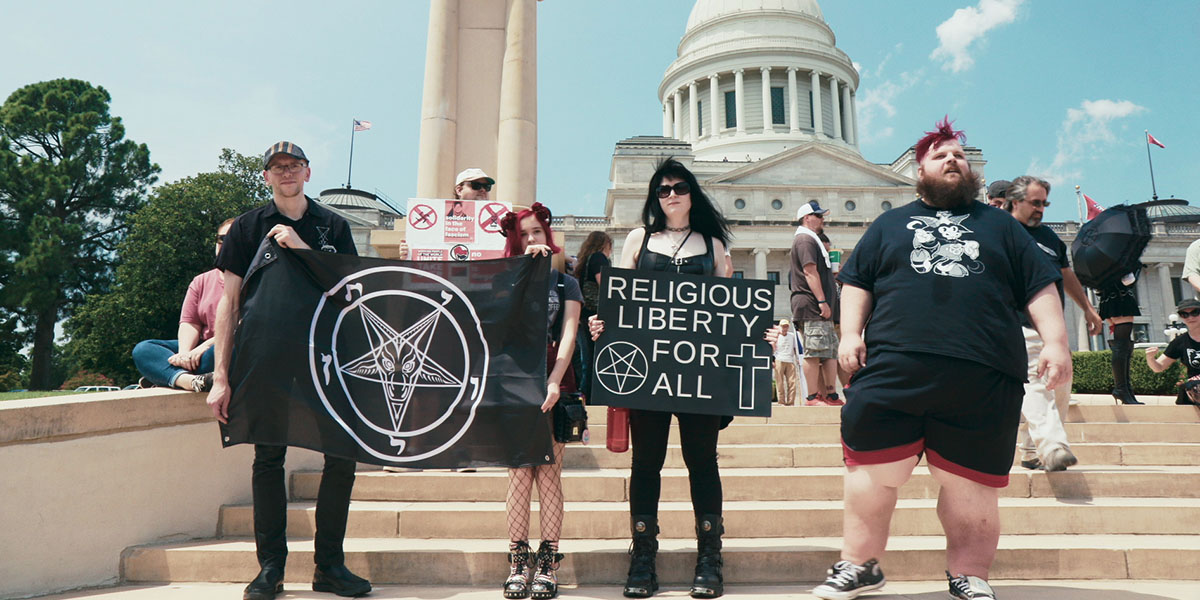 6.5
Hail Satan? (2019) 1h 35min | Documentary | 17 April 2019 (USA)
Director: Penny LaneStars: Jex Blackmore, Chalice Blythe, Nicholas Crowe
Summary: A look at the quick rise and influence of the controversial religious group known as The Satanic Temple.
Countries: USALanguages: English
Source: imdb.comDisclaimer: This plugin has been coded to automatically quote data from imdb.com. Not available for any other purpose. All showing data have a link to imdb.com. The user is responsible for any other use or change codes.

Disclaimer: This is an objective review of the 2019 documentary, directed by Penny Lane. Personally, Sean Kelly does not support or endorse Satanism or The Satanic Temple.

The Satanic Temple campaigns for the recognition of religious plurality in the United States in Hail Satan?. Following in the footsteps of Anton Szandor LaVey’s original Church of Satan, The Satanic Temple is a religious organization co-founded in 2013 by Lucien Greaves and Malcolm Jarry. Positioning themselves more in opposition to Christianity, than a belief in Satan himself, the membership of The Satanic Temple quickly grows across the world. In order to preserve the separation of church and state, The Satanic Temple responds to a government monument of The Ten Commandments in Arkansas by commissioning a statue of the goat demon Baphomet to be positioned right beside it.

In her latest documentary, Penny Lane (Our Nixon, Nuts!) delves into the world of modern Satanism. More specifically, the film is about the quick rise of The Satanic Temple, whose mandate is essentially to support everything that Christianity opposes. These modern day Satanists view themselves less as “evil” and more as adversaries to Christianity and its dominance in North America. This includes campaigning for religious plurality and separation of church and state.

Despite being someone raised Catholic, I went into Hail Satan? with an open mind and indeed many of the members of The Satanic Temple interviewed for the film seem like relatively average people, who are just in opposition to Christianity and want to call that religion out for apparent hypocrisies, particularly the Catholic Church’s cover-up of sexual abuse. Technically atheists, the members of The Satanic Temple have essentially appropriated the Judeo-Christian concept of Satan to play into the fears of the “Satanic Panic,” which tried to associate Satanism to social outsiders that played Dungeons & Dragons or listened to heavy metal music.

Probably one the most interesting takeaways I have from Hail Satan? is how The Satanic Temple has to establish more rules as its membership grows, essentially becoming the type of organized religion that it is fighting against. The film also shows that The Satanic Temple is not immune to religious extremism, as one of the founding members is removed for essentially threatening to kill the president.

While I personally do not support Satanism, I do admit that Hail Satan? does a good job at providing an unbiased look at what The Satanic Temple stands for. However, if you stick around for the clip after the credits, I think it sums up what the group really is quite nicely.

Hail Satan? is now playing at the TIFF Bell Lightbox