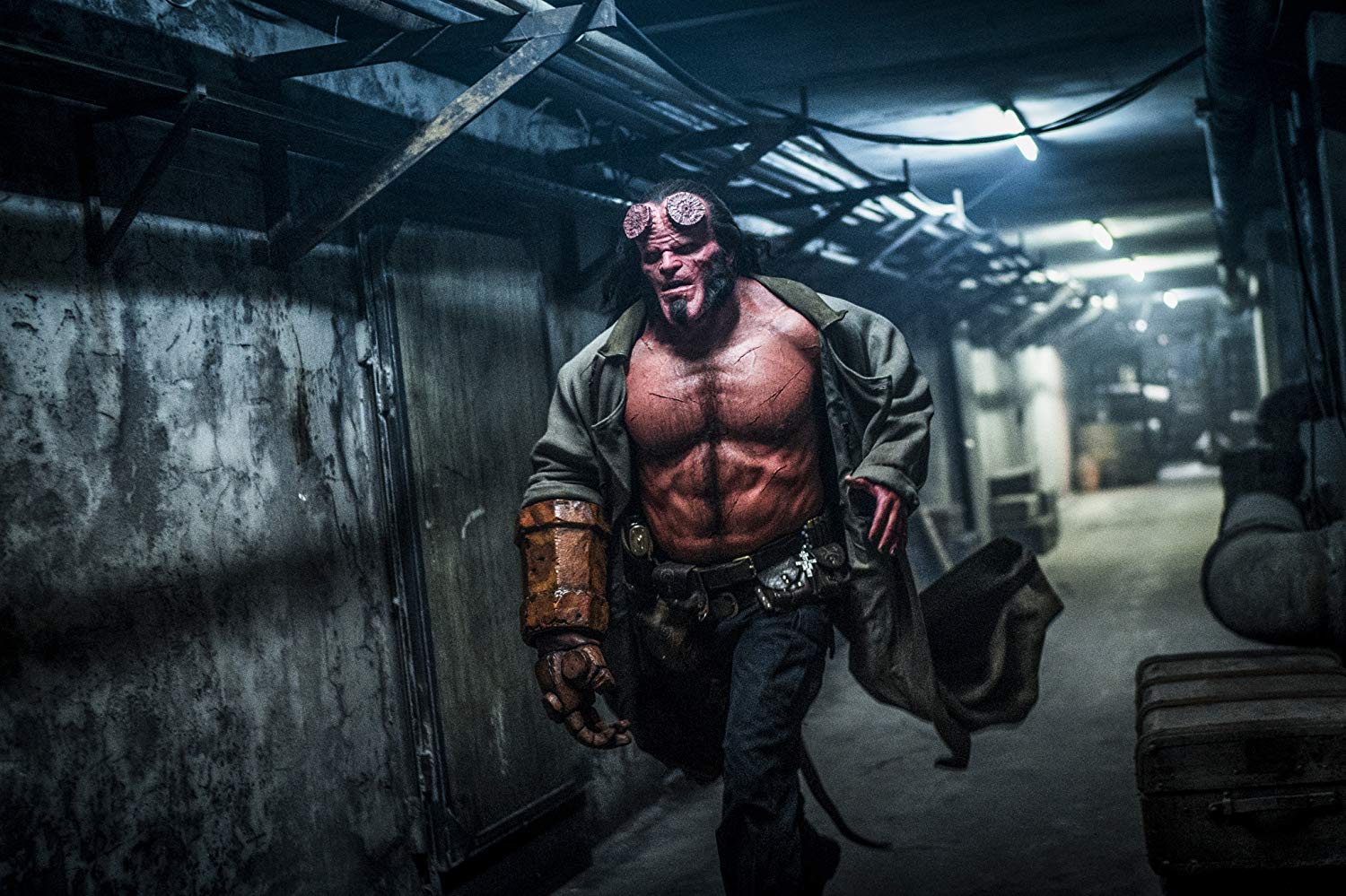 5.4
Hellboy (2019) 2h | Action, Adventure, Fantasy | 12 April 2019 (USA)
Director: Neil MarshallWriters: Andrew Cosby, Mike MignolaStars: David Harbour, Milla Jovovich, Ian McShane
Summary: Based on the graphic novels by Mike Mignola, Hellboy, caught between the worlds of the supernatural and human, battles an ancient sorceress bent on revenge.
Countries: UK, Bulgaria, USALanguages: English, Spanish, German, Russian
Source: imdb.comDisclaimer: This plugin has been coded to automatically quote data from imdb.com. Not available for any other purpose. All showing data have a link to imdb.com. The user is responsible for any other use or change codes.

Neil Marshall reboots the adventures of the monster hunting hellspawn in Hellboy. Hellboy (David Harbour) is a hellspawn raised by Trevor Bruttenholm (Ian McShane) of the Bureau for Paranormal Research and Defense. While on assignment in England, Hellboy comes across a plan by the pig-like fairy Gruagach (Stephen Graham) to resurrect The Blood Queen Nimue (Milla Jovovich). Teaming up with powerful medium Alice Monaghan (Sasha Lane) and the distrustful soldier Ben Daimio (Daniel Dae Kim), Hellboy sets out to stop Nimue before she regains all her powers and helps bring about the apocalypse.

Fifteen years after Guillermo del Toro first brought Mike Mignola Hellboy comics to the big screen in 2004. When plans to complete the planned trilogy fell through, a reboot was greenlit with Neil Marshall (The Descent) stepping into the director’s chair. Unlike Guillermo del Toro’s take on the character, Marshall presents an extremely gory R-rated adaptation that features a greater emphasis on the horror elements of the original source material.

Even though Guillermo del Toro’s two Hellboy films are generally well liked, he had great difficulty trying to get a third film greenlit, reportedly due to creative differences with Hellboy creator Mike Mignola. So, instead of a third film that sees Ron Perlman return to the role, we have a full out reboot with David Harbour (Stranger Things) stepping into the titular role. This alone is going to rub purists the wrong ways, which is compounded by the fact director Neil Marshall goes for a full R-rated take on the character, as opposed to the original PG-13 rated films.

While I will be the first to admit that Guillermo del Toro’s Hellboy films have a certain practical charm that this new film is missing, I cannot say that I did not enjoy myself watching this new take on Hellboy. I should point out those, that this is probably one of the goriest comicbook adaptations that I have ever seen. This is not a surprise, since Neil Marshall has made a career for himself for his extreme depictions of violence, whether it be in films such as The Descent and Doomsday or as a special guest director on Game of Thrones.

While this new Hellboy leans a bit more on CGI for its creature effects, I do have to point out that the standout creature in the film is the witch Baba Yaga, who is practically portrayed by Toronto-based contortionist Twisty Troy James (The Void, Channel Zero), who is able to move his limbs in very unnatural ways. In a similar way the original Hellboy was a springboard for Doug Jones, I can see Twisty Troy becoming one of the go-to creature effects actors in the years to come.

As for the other performances in this reboot, I do think that David Habour does a good job at filling Ron Perlman’s shoes as the titular character, even though I admitted preferred the original performance of John Hurt as Trevor Bruttenholm, as opposed to the more gruff take by Ian McShane. Milla Jovovich does a fine enough job as the antagonist Nimue, though I feel she doesn’t have enough screen time. However, I do have to say that both Sasha Lane (American Honey) and Daniel Dae Kim (Lost) are quite solid in their supporting performance. Then of course, there is a featured cameo by Thomas Haden Church as famed Nazi hunter Lobster Johnson.

In the end, I will say that your enjoyment of Neil Marshall’s Hellboy is quite dependent on your attachment to Guillermo del Toro’s original. This blood soaked adaptation that emphasizes the horror elements of the original comics is probably not for everyone, however I would say that I enjoyed myself.