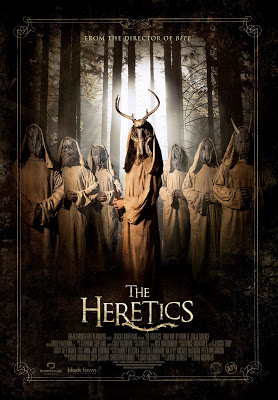 A young woman is the target for a cult’s ritual in The Heretics. Five years ago, Gloria (Nina Kiri) was kidnapped by a cult and made part of a suicide ritual in the woods. Gloria still has nightmares about that day and is comforted only by her love for Joan (Jorja Cadence), who she met in a support group. One night as Gloria is heading home, she is kidnapped by Thomas (Ry Barrett), who happens to be a former member of the cult. Thomas warns Gloria that a surviving cult member is looking for her in order to complete the ritual and that he must hide her in his cabin until sunrise. However, it soon becomes apparent that simply waiting out the night is not that simple.

The latest film by Chad Archibald (Bite), The Heretics is a horror film about a hooded cult, who are looking to bring the dark angel Abaddon into this world. Thomas has never been a believer of the cult’s rituals and believes that Gloria will be safe if they simply wait out the night. However, it soon becomes apparent that there is something inside Gloria wanting to come out. Meanwhile, Joan is desperately trying to find Gloria and is willing to go to extreme lengths to do so.

It can be said that The Heretics is arguably Chad Archibald’s strongest horror film so far, with a simple yet effective story that combines cult rituals with cabin in the woods supernatural horror. The Heretics also utilizes some of the body horror elements found in Archibald’s previous film Bite, as Gloria is slowly taken over by the demon that is inside her. At the core of the story of The Heretics is Thomas’ lack of faith in the beliefs of the cult, which he maintains even as strange events happen in the cabin.

The bulk of The Heretics takes place at the cabin set that was specifically built for the film, with the film primarily focusing on the three central characters of Thomas, Gloria, and Joan. There are actually some effectively creepy moments in The Heretics and number of well executed jump scares. Without revealing too much, The Heretics also has some interesting plot revelations and the film almost plays a bit with viewer expectations, leading to a surprising final shot. Altogether, The Heretics is definitely worth checking out.