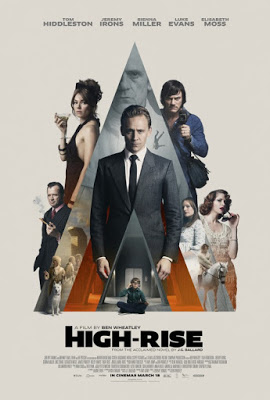 A new resident of a high-rise tower finds himself in the middle of battle between the classes in High-Rise. Dr. Robert Laing (Tom Hiddleston) is a physiologist, who has just moved into the 25th floor of a state of the art forty story London high-rise tower designed by architect Anthony Royal (Jeremy Irons), who lives in the penthouse. Robert quickly finds himself in a relationship with upstairs neighbour Charlotte Melville (Sienna Miller) and also befriends filmmaker Richard Wilder (Luke Evans) and his pregnant wife Helen (Elisabeth Moss). Tensions quickly begin to boil between the high society individuals that occupy the upper floors and the common people that occupy the lower levels. As the tensions turn into a full-on uprising, Robert tries to figure out where his place in the high-rise truly is.

British director Ben Wheatley (Kill List, Sightseers) directs this film adaptation of the 1975 novel written by J.G. Ballard. An adaptation of the novel was in various stages of development for decades, with the book at one point even being considered unfilmable. Indeed, the story of High-Rise is not the easiest to fathom.

Probably the most simple description of High-Rise is that the first is a satire of life within condominium buildings, which can be seen as of world of their own. This high-rise in particular features many conveniences, such as a swimming pool, gym, and even a supermarket. With everything being provided at the high-rise, there wouldn’t seem to be any reason to ever venture out into the outside world. This causes a problem as the “growing pains” of the building causes problems, such as power outages, on the lower floors, which causes tensions between lower floor residents, such as Richard Wilder, and upper floor residents, such as John Pangbourne (James Purefoy). In the middle of all of this growing chaos is Robert Lang, who would rather just stick to his daily routines, rather than get himself involved with this condominium class warfare.

High-Rise is a film that is filled with much dark humour, which gets darker as the film progresses. It is quite biting satire in how life in this high-rise just devolves to pure anarchy, simply because nobody is willing to leave the conveniences of the building for the outside world. While High-Rise doesn’t quite have the same level of violence featured in some of Ben Wheatley’s other films, there are still a couple graphic images in the film and this is probably not the best film for dog lovers to watch.

I don’t know if High-Rise proves or disproves the original belief that J.G. Ballard’s novel was unfilmable. I will say that the film is quite dark and surreal and probably won’t be for everybody.