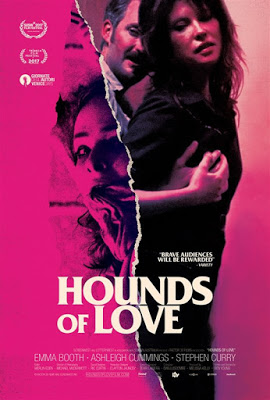 A teenage girl is kidnapped by a disturbed couple in Hounds of Love. Set in 1987 Perth, Australia, Vicki Maloney (Ashleigh Cummings) sneaks out of her mother’s house to attend a party. On the way, she is approached by the couple of John White (Stephen Curry) and his wife Evelyn (Emma Booth), who offer to drive Vicki to their house, under the pretense of selling her marijuana. However, soon after arriving at the house, Vicki finds herself drugged and chained to a bed, to be used for the couple’s perverse sexual fantasies.

For his debut feature film, writer/director Ben Young has created one nasty piece of work with the Australian horror film Hounds of Love. Instead of focusing on blood, guts, and monsters, Hounds of Love focuses on the real life horror of a twisted couple, who kidnaps teenage girls to rape, before murdering them and burying their bodies in the woods. The opening moments of Hounds of Love illustrates John and Evelyn’s M.O., resulting the building of suspense when they encounter Vicki.

Hounds of Love is not at all a pleasurable film to watch and it is in fact downright disturbing at times. While very little violence is actually shown on screen, the suggestion of the things John and Evelyn do to Vicki makes the film quite hard to watch at times. It is also quite scary that the film is quite similar to real life cases of couples, who raped and murdered young women. As possible direct inspiration for Hounds of Love is the 1986 case of Australian serial killers David and Catherine Birnie, who murdered four girls. Closer to home, there was the infamous case of Paul Bernardo and Karla Homolka, who murdered a number of girls in the Greater Toronto Area in the early 1990s. The very fact that Hounds of Love features horror that can happen in real life, just makes it all the more difficult film to watch.

Now, the major question at hand is whether or not I should recommend people to watch Hounds of Love for themselves. It turns out that the answer to this question is quite complicated. I would say that if you are easily triggered by scenes of sexual assault or violence against women, you would be best advised to stay far away from this film. However, the film does feature some important themes about the victimization of women. In fact, it is revealed throughout the course of the film that Evelyn’s relationship with John is an abusive one and she is only going along with his twisted fantasies to ensure that he stays around. Even John himself, who is quite despicable to watch for most of the film, turns out to be quite complex character.

While Hounds of Love is a film is not a film that I ever want to rewatch, it is still a very well made horror film, which really succeeds in being quite horrifying.