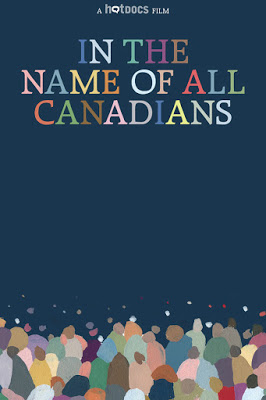 Presented by Hot Docs, in commemoration of Canada’s 150th anniversary and the 35th anniversary of the Canadian Charter of Rights and Freedoms, In the Name of All Canadians is a compilation of six short documentaries, each focused on a different aspect of the charter.


In Part (Khoa Lê) features a wide variety of Canadians being asked a series of questions. L’inspecteur (Jérémie Wookey, Janelle Wookey and Annick Marion) sees a number of people recalling the time when it was forbidden to teach French in Manitoba. Long Way Home (Ariel Nasr and Aisha Jamal) tells the story of Abousfian Abdelrazik, a black Muslim man, who found himself imprisoned in Sudan for years without being charged. Notwithstanding (Patrick Reed and Andréa Schmidt) presents a number of scenarios, where the Charter’s notwithstanding clause can be used to the detriment of other rights. Last Resort (Vivian Belik and Jennifer Bowen-Allen) follows the efforts of the Ktunaxa Nation in B.C. to prevent development of a ski resort on the sacred glacier Qat’muk. Finally, Lessons Injustice (Karen Chapman) has a black father pondering how he will tell his son that his rights will likely be violated by authorities, just because of the colour of his skin.

Commissioned by Hot Docs and Creative Producer Dan Montgomery, In the Name of All Canadians features six short documentaries that all deal with various elements of the Canadian Charter of Rights and Freedoms, which was created in 1982 and embedded within the Canadian Constitution. A recurring theme within these six documentaries is the rights detailed in the charter can often be misinterpreted or ignored, especially when it involves minority groups.

The segment In Part acts as a framing device for this collection, as various Canadians of all types give their answers to a series of questions, ranging from favourite language, colour, or whether they choose rights or freedoms. While the other segments of In the Name of All Canadians have a somewhat more serious tone to term, In Part is very colourful, upbeat, and almost hip. This does result in a bit of a clash with the rest of the collection, though In Part still works fine as a framing device.
L’inspecteur reminisces about the Thornton Act, which was passed in Manitoba in 1916, removing the bilingual school system. This segment focuses on the efforts of those who tried to protect the French language and the hide the fact that French continued to be taught from the anglophone inspectors. This segment features animated recreations of the events being recollected and is also very enlightening about a time when the French language was in danger in Canada, long before it was declared an official language an protected in the charter.
The story of Abousfian Abdelrazik, told in the segment Long Way Home is not one that you would usually associate with Canada. In this case, Abdelrazik was arrested in Sudan, after travelling there to visit his ailing mother, and jailed for three years without being changed. He was then subsequently placed on a terrorist blacklist and refused reentry into Canada. Long Way Home is a scary tale of someone getting their rights violated, because of their race and religion, but it is also a hopeful one, since Abousfian Abdelrazik gained many supporters back in Canada.
Notwithstanding uses actors to narrate a series of true accounts and give speculative scenarios how the charter’s notwithstanding clause can possibly be used under extreme circumstances to remove other rights from individuals. This segments deals with some very real issues right now, such as Islamic practices and the right to peaceful protest, both of which can be taken away using the notwithstanding clause. This definitely creates a scary scenario.
Last Resort covers the first ever Indigenous freedom of religion challenge to be brought before the Supreme Court. In this case, the Ktunaxa Nation are fighting against the development of a ski resort on Jumbo Mountain in B.C., which is known as Qat’muk to the Ktunaxa and is considered a very sacred location. Last Resort raises questions about whether or not Canada is willing to act on all the talk about reconciliation with the First Nations community and how this Supreme Court ruling will say a lot about future relations.
The final segment Lessons Injustice deals with a very sad truth: Rights don’t protect black people on the street. This entire segment consists of narration by a black father, shown driving in a car with his 16 year old son, who is contemplating how he is going to tell his son about the inherently racist world that they live in. With the rise of the Black Live Matter movement in recent years, Lessons Injustice reiterates how black people remain a subject the prejudice and that the rights declared in the charter have never saved anybody on the street. While this is arguably a common known fact, it doesn’t make it any less tragic, especially since white parents never will have to have such conversations with their kids.
Despite the somewhat jarring tone found in the framing segment, In the Name of All Canadians is still a very interesting exploration into the Canadian Charter of Rights and Freedom, with the film making you think about what more should be done in this country to protect the rights of people of all types.
8 / 10 stars