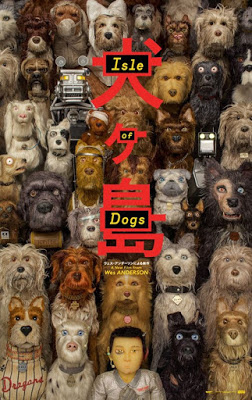 Wes Anderson returns with the stop motion Japanese adventure Isle of Dogs. 20 years in the future, all the dogs of Japan are afflicted by a virus and Mayor Kobayashi (Kunichi Nomura) of Megasaki City decrees that all dogs be deported to nearby trash island. One day, the five alpha dogs of Chief (Bryan Cranston), Rex (Edward Norton), King (Bob Balaban), Boss (Bill Murray), and Duke (Jeff Goldblum) come across a young pilot named Atari (Koyu Rankin), who has come onto the island to look for his dog Spots (Liev Schreiber), who was the first dog to be deported to the island. Meanwhile in Megasaki, exchange student and activist Tracy Walker (Greta Gerwig) fights for the rights of the dogs on the island.

Nearly a decade after his adaptation of The Fantastic Mr Fox, Wes Anderson returns to stop motion for Isle of Dogs. The plot of the film follows five dogs on trash island, who decide to help out the young pilot Atari find his missing dog Spots. As this search is going on, an election is going on in Megasaka City, with the cat-loving Mayor Kobayashi and his aide Major-Domo (Akira Takayama) plotting to get reelected an ensure that all the deported dogs are eliminated.

An interesting decision that Wes Anderson makes with Isle of Dogs is that even though all the canine characters are anthropomorphic, all the human characters speak in their native language. With the setting of the film being in Japan, that means that most of the humans speak Japanese, with translation as needed being given by the character of Interpreter Nelson (Frances McDormand). This in a sense makes the dogs in Isle of Dogs seem more human than the humans.

Of the five main dogs in the story, most of the focus put on Chief, voiced by Bryan Cranston, who spent most of his life as a stray and does’t know what it was like to live with a master. Over the course of the journey to find Spots, Chief progressively gets more attached to Atari and begins to understand the bond between dogs and humans.

Like most Wes Anderson films, Isle of Dogs has a large ensemble cast. In addition the five main dogs, the film features of the voices of Scarlett Johansson, Harvey Keitel, F. Murray Abraham, Yoko Ono, Tilda Swinton, Ken Watanabe, Fisher Stevens, and Courtney B. Vance as the narrator. However, other the main characters, many of the supporting actors in the film only have one or two scenes or in some cases a couple lines.

Even though Isle of Dogs is an animated film, I wouldn’t exactly describe it as a kids film and there is bit of a dark edge to the plot of the film and even some violence. However, I would say that this is ultimately a film that will be enjoyed by people of all ages, particularly if you are a dog lover.