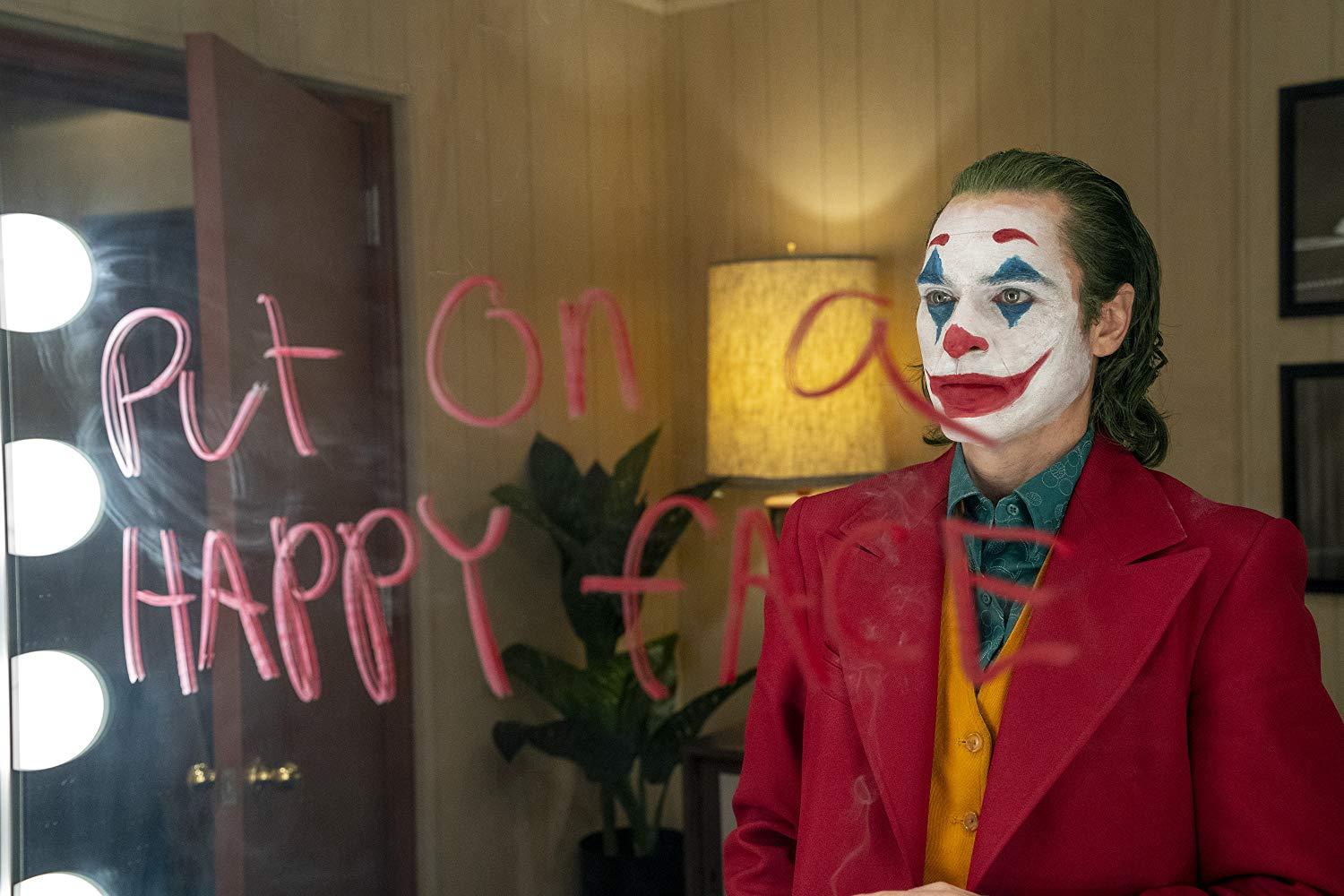 9.1
Joker (2019) 2h 2min | Crime, Drama, Thriller | 4 October 2019 (USA)
Director: Todd PhillipsWriters: Todd Phillips, Scott SilverStars: Joaquin Phoenix, Robert De Niro, Zazie Beetz
Summary: A gritty character study of Arthur Fleck, a man disregarded by society.
Countries: USA, CanadaLanguages: English
Source: imdb.comDisclaimer: This plugin has been coded to automatically quote data from imdb.com. Not available for any other purpose. All showing data have a link to imdb.com. The user is responsible for any other use or change codes.

An alternate history of the DC comics villain is told in Joker. Arthur Fleck (Joaquin Phoenix) is a lonely man with mental health issues, who lives alone with his mother Penny (Frances Conroy) and dreams of being a popular standup comedian and appearance on a talk show hosted by Murray Franklin (Robert De Niro). During his job as a party clown, Arthur is the subject near-daily ridicule and one night, after being freshly fired for accidentally dropping a gun in a children’s hospital, Arthur guns down three men on the subway, who happen to be employees of Thomas Wayne (Brett Cullen). This incident inspires the population of Gotham to rally against the elite and Arthur finally gets the idea of the type of person he wants to be.

Todd Philips (The Hangover) moves away from the comedies he has primarily been known for and presents a very dark and gritty origin story for The Joker. While the film does take some inspiration from Alan Moore’s seminal 1988 graphic novel “The Killing Joke,” Philips and co-writer Scott Silver presents a mostly original story that examines how The Joker came to be known as the Clown Prince of Crime. At the centre of Joker is Arthur Fleck, a lonely man with a condition that causes him to burst into uncontrollable fits of laughter. Arthur has no general direction in his life, though he dreams of being a stand-up comedian and he begins courting his neighbour Sophie Dumond (Zazie Beetz). However, following an encounter with three bullying brokers on a subway, which ends in bloodshed, Arthur begins to descend down a much darker path.

There has been much that has been said about Joker prior to the film’s release, particularly centred around how the film is about how the protagonist turns into a psychotic villain. While some of the early criticisms of the film are a bit unfounded, there are others that do have a point. Before I present my own criticisms of Joker, I will say that Joaquin Phoenix does give an excellent performance as Arthur Fleck and is well-deserving of all the praise he has been given.

Taking a very gritty and realistic approach, Joker has much more in common with Martin Scorsese’s films Taxi Driver and The King of Comedy than the traditional depiction of The Joker in DC comics. Arguably, the main thesis of Joker is that Arthur Fleck’s history of mental illness and isolated lifestyle is the cause of his descent into madness. As someone who has mental health issues, and takes daily medication for it, I have to say that I am somewhat bothered in how Joker utilizes to worst stereotypes of mentally ill people to essentially provide an excuse for Arthur Fleck’s sociopathic and violent behaviour. Early in the film, we see a quote in Arthur’s journal, which says that the problem of having a mental illness is that people “expect you to behave as if you are not.” Later in the climax of the film, a full-on Joker cites his mental illness and the torment he has received, before yelling “you get what you deserve” as he shoots someone point-blank.

I am not specifically going to criticize Todd Philips for going in decidedly R-rated direction with Joker since it is obvious that he is setting this story closer to the world we live in than a comic book universe. However, suggesting that mental illness and isolation is solely responsible for turning Arthur Fleck into a psychopathic killer is quite disrespectful to people like me, who have to live with the struggles and challenges of mental illness on a daily basis. The last thing I want is for people to fear that I am going to get a gun and shoot people, just because I’m “not right in the head.”

At the end of it all, I won’t go as far and say that Joker is a terrible movie, but I will say that it is a highly problematic one. While Joaquin Phoenix does deliver one of his career-best performances in the film, I do wish that Todd Philips could have taken a slightly different angle when it comes to telling the origins of the Clown Prince of Crime.