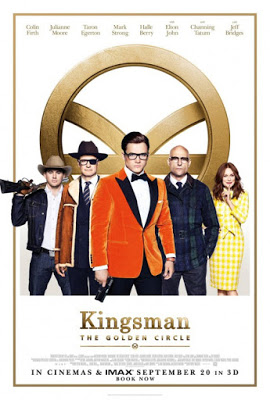 Kingsman teams up with their American cousins to bring down a psychopathic drug lord in Kingsman: The Golden Circle. A year has passed since Eggsy Unwin (Taron Egerton) became of a full agent of the Kingsman spy organization, even though he deeply misses his fallen mentor Harry Hart (Colin Firth). However, a terrorist organization known as the Golden Circle, run by ditsy drug lord Poppy Adams (Julianne Moore), hacks into Kingsman and destroys all of its headquarters as agents. With Eggsy and Merlin (Mark Strong) being the only surviving agents, they travel to Kentucky to seek the assistance of Kingsman’s American counterpart Statesman, headed by Champagne (Jeff Bridges). It is there that they a fully alive Harry Hart, who was saved by Statesman, yet suffers from some amnesia and brain damage from his bullet wound.

Matthew Vaughn returns with a sequel to his 2014 action/spy/comedy Kingsman: The Secret Service, which in turn is based on the comic book series by Mark Millar and Dave Gibbons. This new adventure has the Kingsman headquarters destroyed, leaving Eggsy to team up with the cowboy-based agency Statesman, whose agents include Ginger (Halle Berry), Whiskey (Pedro Pascal), and Tequila (Channing Tatum). The save the world situation this time is to stop 1950s-obsessed drug tycoon Poppy Adams, who has placed a poison in her product, which endangers the lives of millions of people around the world.

In the set-up for this sequel, Matthew Vaughn goes for a G.I. Joe: Retaliation like soft reboot in the first act, destroying Kingsman headquarters and killing off most of the returning supporting characters. This leaves Eggsy the sole survivor, along with fellow-agent Merlin. This sets up the introduction of the Statesman and the surprising return from the dead for Harry Hart, whose survival from a gunshot wound to the head is explained by some high tech exposition. However, another somewhat unexpected return in the film is rescued Swedish Princess Tilde (Hanna Alström), who was the punchline of a sex joke in the first film, but is now in a relationship with Eggsy, with the latter’s duties as an agent causing some tension.

While Kingsman: The Secret Service was a pretty enjoyable and hyper-violent action-spy film, there are many elements of Kingsman: The Golden Circle that come off as much more generic. Julianne Moore is not as interesting as Samuel L. Jackson as the film’s villain, with her big gimmick being that she is incredibly ditsy and happy, despite being a complete psychopath. However, there is a scene-stealing turn by Elton John, who is kidnapped by Poppy and is often seen throwing f-bombs at her. I also have to note that the climax of Kingsman: The Golden Circle does feature a level of entertainment on par with the original, even though it does take quite a while to get there, with the film having a nearly two and half hour run time.

Altogether, Kingsman: The Golden Circle suffers from some sequelitis, but is still generally an entertaining watch.