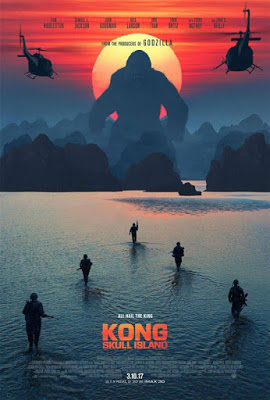 A group of explorers travel to and island ruled by a giant ape in Kong: Skull Island. Bill Randa (John Goodman) is a government official, who is made in charge of an expedition to the uncharted skull island. The expedition is escorted by a platoon of soldiers fresh out of the Vietnam War, lead by Lieutenant Colonel Preston Packard (Samuel L. Jackson) and is also joined by tracker James Conrad (Tom Hiddleston) and photojournalist Mason Weaver (Brie Larson). Soon after arriving on the island, the explorers are attacked by a giant ape, who the local tribes have named Kong. However, Kong is the least of their worries, as Skull Island is home to many other monstrosities.

Kong: Skull Island is the latest film to bring King Kong to the big screen, arriving 12 years after Peter Jackson’s epic remake of the original 1933 film. Unlike other versions of this story, Kong: Skull Island remains on the titular island, as this group of explorers encounter many deadly creatures. After an initial attack by Kong, the expedition finds themselves separated. Conrad and Weaver end up finding a local tribe, who has been sheltering World War II soldier Hank Marlow (John C. Reilly) for nearly three decades. Meanwhile, Packard and his platoon become obsessed with gaining revenge against Kong for the attack, even though he is the monster they have to worry about the least.

With the film taking place in the early 1970s, shortly after the end of the Vietnam War, Kong: Skull Island feels pretty much like a Vietnam War film, particularly Apocalypse Now, of which there are many obvious reference to. However, Kong: Skull Island is ultimately a monster film, with the island featuring many creatures ranging from the reptilian “Skullcrushers” to giant spiders. This results in Kong: Skull Island coming off as a mix of big Hollywood blockbuster and campy B-movie.

Kong: Skull Island is meant as the second entry in Warner Bros and Legendary Entertainments “MonsterVerse,” following 2014’s Godzilla. Indeed, if you remain after the credits of Kong: Skull Island, you will see that plans are underway to crossover these giant monsters. It is an interesting route to go and it will be interesting to see how these films pan out over the next few years, with the next entry in this series being the 2019 Godzilla sequel King of the Monsters.

Altogether, Kong: Skull Island turned out to be a fun mix of Vietnam War film and monster movie.