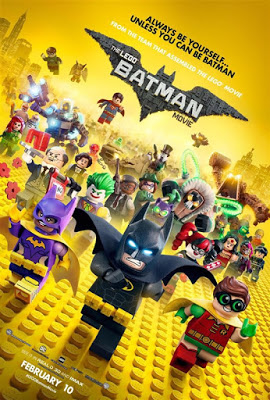 The LEGO Dark Knight sets out to protect Gotham City from The Joker in The LEGO Batman Movie. After foiling the latest plan by The Joker (Zach Galifianakis), Batman (Will Arnett) is shocked to discover that new commissioner Barbara Gordon (Rosario Dawson) wants to de-emphasize Batman’s vigilantism. In addition, Batman is shocked to discover that he inadvertently adopted orphan Dick Grayson (Michael Cera) and is encouraged by Alfred (Ralph Fiennes) to take responsibility. When The Joker frees the baddest supervillains from The Phantom Zone, Batman must learn to accept the help of others.

Following the huge success of 2014’s The LEGO Movie, a series of spin-off films entered into development. First out of the gate is a film centred around the LEGO version of Batman, with Will Arnett returning to voice this arrogant and self-centred version of the caped crusader. The LEGO Batman Movie starts off on a major high note, as it parodies a typical Batman adventure, complete with the appearance of pretty much every villain in Batman’s rogue’s gallery.

Sadly, the opening sequence of The LEGO Batman Movie is also where the film peaks. While the rest of the film is perfectly fine, it pales in comparison to the surprisingly heartwarming places The LEGO Movie went. In fact, the film makes Batman a lonely soul in desire of a family, which comes of as quite uncharacteristic and seemingly shoe-horned in to give the film a message about friendship. The very fact that the plot is built around Joker’s bromantic desire to be viewed as Batman’s arch villain is quite awkward to watch at times.

While The LEGO Movie covered the spectrum of the LEGO universe, The LEGO Batman Movie remains relatively contained in Gotham City. In fact, other than the fact the Batman occasionally has to rebuilt his vehicle, the LEGO element is not that emphasized this time around. In fact, the film also seems more concerned with advertising the different branded LEGO sets, particularly in how The Joker recruits every Warner Bros owned villain, including Voldemort ( Eddie Izzard), Sauron (Jemaine Clement), and even the Gremlins. There are also a few additional villains thrown into the mix, including King Kong (Seth Green), the Wicked Witch of the West, and Daleks.

The LEGO Batman Movie has some brief moments of greatness, particularly as it references every moment of Batman’s history, including the campy 1960s TV show. However, after a strong start, the film turns into a merely OK adventure meant to sell a lot of LEGO merchandise.