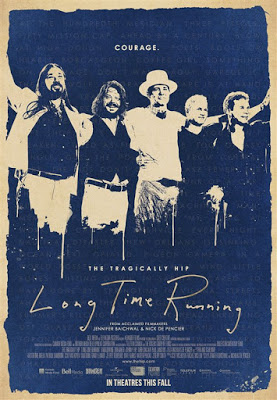 Take a behind the scenes look at The Tragically Hip’s final tour in Long Time Running. In early 2016, Tragically Hip lead singer Gord Downie was diagnosed with terminal brain cancer. After having surgery to remove most of the tumor, extending his life by at best five years, Downie is committed to going on tour with The Tragically Hip in support of their album “Man Machine Poem.” With an overwhelming concern about Gord Downie’s health, the band prepares to tour across Canada for possibly the final time.

It is hard not to grow up in Canada and not have heard of The Tragically Hip, who are probably second only to Rush as the country’s premiere rock band. The band all started as high school friends in Kingston, Ontario and have enjoyed a career spanning more than three decades. The diagnosis of Gord Downie with an incurable brain tumour is a big shock to the band, since it inevitably means the end to The Tragically Hip.

While recovering from surgery, Gord Downie is committed to go on one last tour with The Tragically Hip. However, with his condition affecting Downie’s recollection of the band’s lyrics, preparing for the tour is an immense challenge, as they have to rehearse 90 songs from the band’s catalogue, with multiple teleprompters helping Downie with the lyrics. The Man Machine Poem tour kicks off in Victoria, BC and builds up to a televised final show in Kingston.
There is a quote at one point in Long Time Running that states that bands are like hot air balloons, which rise up to extreme highs, before coming crashing down. The Tragically Hip’s final tour marks one of the few times a band is able to achieve a perfect landing and say goodbye on their own terms. While it is not yet confirmed that the 2016 Man Machine Poem Tour marked the end of The Tragically Hip as a band, it is quite probably the final time they would embark on a full tour.
Filmmakers Jennifer Baichwal and Nicholas de Pencier follow The Tragically Hip as they embark on this tour. The film includes some very candid behind-the-scenes footage, such as Gord Downie’s very first rehearsal with the band following brain surgery. The tour footage is accompanied by interviews with the band members, as they talk about the band’s history and what this tour means to them personally.
It’s hard not to feel emotional watching Long Time Running, since it comes off as a final goodbye from The Tragically Hip, even more so than the tour itself. The band notes that even though they always tried to view themselves as an equal unit, the situation surrounding this tour caused Gord Downie to take most of the spotlight. It should be noted that despite his terminal condition, Downie remains in relatively good spirits throughout this film, though there are moments when he gets a bit emotional.
Altogether, Long Time Running is an emotional goodbye from one of Canada’s top bands.