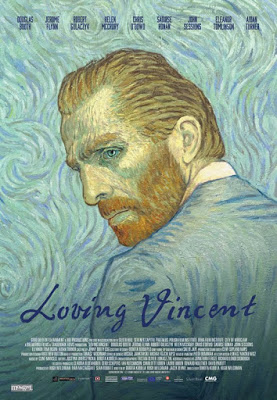 Oil painted visuals tells the story of the life and death of Vincent van Gogh in Loving Vincent. One year after the suicide of Vincent van Gogh (Robert Gulaczyk), Armand Roulin (Douglas Booth) is asked by his postmaster father Joseph (Chris O’Dowd) to deliver an undelivered letter from Vincent to his brother Theo. After finding out that Theo has since died as well, Armand travels to Auvers-sur-Oise, where Vincent spent his final months, to locate Dr Paul Gachet (Jerome Flynn) to give the letter to. While waiting for Dr. Gachet to return home, Armand speaks to a number of locals about the events leading to Vincent’s death, including Dr. Gachet’s housekeeper Louise Chevalier (Helen McCrory), daughter Marguerite Gachet (Saoirse Ronan), innkeeper Adeline Ravoux (Eleanor Tomlinson) and a local boatkeeper (Aidan Turner).

Loving Vincent is an animated biography of Vincent van Gogh told entirely through oil painted visuals. The story takes place a year after Vincent’s death, as the son of a friend of the painter tries to decipher why Vincent from being calm to suicidal in a matter of weeks. Vincent van Goph’s story is told primarily through black and white flashbacks narrated by the multiple individuals Armand Roulin comes across throughout the film. Some viewed Vincent van Goph as a crazed madman, while others viewed him as a relatively normal, yet tragic figure.

With Loving Vincent, first time filmmakers Dorota Kobiela and Hugh Welchman employed over 100 artists to create 65,000 oil painted frames to created a rotoscoped biopic of Vincent van Gogh. With the film painted in the style of the artist’s famous works, Loving Vincent essentially brings Vincent van Gogh’s art to life. A number of well-known actors, such as Douglas Booth, Chris O’Dowd, Helen McCrory, Saoirse Ronan, and Jerome Flynn lend their voice and likeness to the film to recreate a number of individuals Vincent painted throughout his career.

Undoubtedly Loving Vincent is a visual achievement and is probably one of the most ambitious rotoscoped films to be made. However, the actual story of Loving Vincent leaves a lot to be desired. The film almost takes the format of Citizen Kane, as Armand Roulin speaks to a number of people about their encounters with Vincent van Gogh, which leads into a flashback sequence. With these flashbacks taking up at least half the film, and being in black and white, it sort of beats the point of the film being rotoscoped in the first place, since you only get the vibrant oil-painted colours for part of the film.

Despite having a very weak and generic story, it is quite interesting in itself just watching the oil painted animation in action. From quite visual brushstrokes to slight imperfections, watching Loving Vincent is definitely a feast for the eyes. It’s just a shame that the actual story for the film wasn’t up to par.