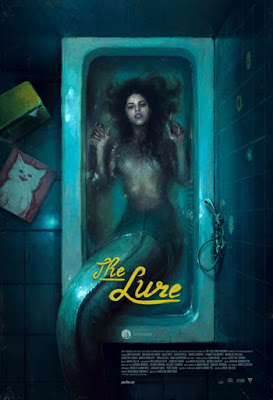 Young mermaids become hits in a Warsaw nightclub in The Lure. Golden (Michalina Olszanska) and Silver (Marta Mazurek) are two mermaid sisters, who arise from the ocean in 1980s Warsaw. Thanks to their hypnotic siren singing powers, the two mermaids become the spotlight attraction of a band performing at a burlesque nightclub, which begins to call themselves “The Lure.” While the sisters initially plan on being on shore temporary, Silver begins to fall for the band’s bassist Mietek (Jakub Gierszal), which leads to some major complications.

The feature film debut of Polish director Agnieszka Smoczynska, The Lure is a film that defies genre classification. Simultaneously being a horror film, musical, and coming-of-age drama, The Lure is definitely a very unique film. Borrowing some familiar plot elements from Hans Christian Andersen’s The Little Mermaid, one of the main dramatic arcs of the film involves blonde-haired mermaid Silver falling in love and desiring to become human. However, the problem is that if her love is not reciprocated, Silver is in danger of turning into nothing but sea foam. Despite the plot similarities to The Little Mermaid, The Lure is definitely not a story meant for children, with the two mermaids often appearing completely nude and having the habit of ripping out and eating men’s hearts.

I can say that without a doubt that I highly enjoyed The Lure, which is able to seamlessly move between catchy musical numbers and heart-eating violence and gore. At first, it may seem like the two sisters are polar opposites, with Golden being apparently the more wicked of the two. However, it quickly turns out that she is more concerned with her sister’s well being, since Golden knows what will happen if Mietek doesn’t return Silver’s feelings for him. The film’s many musical performances are quite well executed and very catch, with the music of the film exploring different genres, from disco to punk rock.

For some people, the plot of The Lure might be a bit too weird for their liking. If a film about singing mermaids that eat men’s hearts doesn’t sound appealing to you, it probably isn’t. However, The Lure is still a very fine debut for Agnieszka Smoczynska and I will be interested in seeing anything she does next. The Lure also features a standout performance by up-and-coming actress Michalina Olszanska, who also shines in the the Czech drama I, Olga Hepnarová.

Overall, The Lure is one very unique film about singing mermaids, who eat men’s hearts.