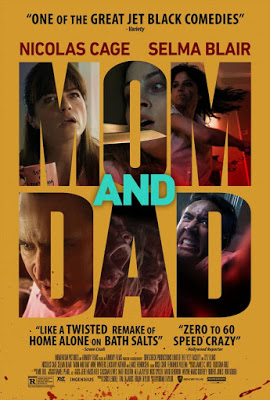 A mass hysteria results in parents trying to kill their kids in Mom and Dad. Carly Ryan (Anne Winters) is a teenage girl who has a strained relationship with her parents Brent (Nicolas Cage) and Kendall (Selma Blair). One day without explanation, parents all over the country gain the sudden compulsion to kill their children. Carly, her boyfriend Damon (Robert T. Cunningham), and her younger brother Josh (Zackary Arthur) struggle to survive the violent pursuit of her parents.

Mom and Dad is the solo debut from writer/director Brian Taylor, who is best known from his collaborations with Mark Neveldine as the duo Neveldine/Taylor (Crank, Gamer, Ghost Rider: Spirit of Vengeance). The film centres around a sudden event that develops over the course of a day, where parents all over the country get the uncontrollable urge to kill their children. After bearing witness to the initial chaos, it is not long before Brent and Kendall find themselves infected by the condition, leaving Carly to try and protect herself and her brother Josh.

While 2006’s Crank remains a guilty of pleasure of mine, I steadily tired of the antics of Neveldine/Taylor over the years and Brian Taylor on his own is not much better as a filmmaker. Mom and Dad is a film with a very interesting premise, yet a very messy execution. It is obvious that the plot of the film is meant as a metaphor for the frustrations that come from being both middle-aged and a parent, however the film is quite jarring at times, particular the use of sudden flashbacks to a less crazy period.

Probably the main selling point of Mom and Dad is the fact that Nicolas Cage goes all in with providing the crazy and is quite entertaining to watch during the cat and mouse third act. However, there is more than an hour of build-up before Brent and Kendall finally go crazy and much of the first half is dedicated to the slow build of this mass hysteria, which is never fully explained. The film also features many of the aspects of Brian Taylor’s previous films that I don’t really like, such jarring handheld angles and crude content just for the sake of crude content.

At the end of the day, Mom and Dad is not a film that I can fully recommend, however it is worth a watch if you like watching Nicolas Cage of full on crazy man mode.