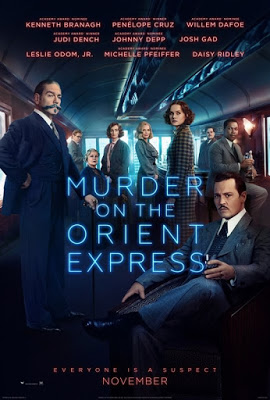 Kenneth Brannah directs and starts in this new adaptation of Agatha Christie’s Murder on the Orient Express. After finishing a case in Jerusalem, Belgian detective Hercule Poirot (Brannah) is called back to London, disrupting his plans for vacation time in Istanbul. Poroit secures a place on the Orient Express, run by his friend Bouc (Tom Bateman) and prepares to make the three day trip back to London.

On the second night, the train is derailed by an avalanche and an American businessman named Samuel Ratchett (Johnny Depp) is found murdered in his compartment. Poirot agrees to help Bouc solve the case before the train is up and running again and he proceeds to investigate the other passengers, which includes Ratchett’s valet Edward Henry Masterman (Derek Jacobi) and secretary Hector MacQueen (Josh Gadd), Governess Mary Debenham (Daisy Ridley), Dr. John Arbuthnot (Leslie Odom Jr.), Spanish missionary Pilar Estravados (Penélope Cruz), Princess Dragomiroff (Judi Dench), Austrian professor Gerhard Hardman (Willem Dafoe) and Caroline Hubbard (Michelle Pfeiffer). The case becomes a daunting one, as Poirot learns each other the suspects has a connection to the victim.

Murder on the Orient Express is a new film adaptation of the 1934 novel by Agatha Christie, with the story being previously having been adapted as a 1974 film, featuring an Oscar-nominated performance by Albert Finney as Hercule Poirot. Kenneth Brannah takes the reins of this new adaptation written by Michael Green (Logan), with Brannah stepping into the role of Poirot, accompanied by as all-star cast that includes Johnny Depp, Michelle Pfeiffer, Willem Dafoe, Penélope Cruz, and Judi Dench.

The character of Hercule Poirot is known for having a very distinguished mustache, though it could probably be argued that Kenneth Brannah goes a little bit overboard with his characterization of Poirot, sporting a mustache that literally covers half his face. Brannah also portrays Poirot as quite the eccentric, with the character almost bordering on Inspector Clouseau at times, which is probably not helped by the thick French accent Brannah is sporting.

Despite the eccentricities of Brannah’s Poirot, this new version of Murder on the Orient Express is still a decent telling of the story. However, the problem with making a film adaptation of such a famous mystery story is that many people, including myself, would go and see the film knowing who the killer is. However, I do think Brannah did a good job and spreading red herrings and there was even a brief moment when I began thinking about whether or not they changed Agatha Christie’s ending for this new film.

With the film sporting such a large ensemble cast, it is easy for some of the characters to get lost in the shuffle. However, I do have to say that Daisy Ridley does hold her own in her first major non-Star Wars role, which suggests that she will have a great career after she’s finished with the new trilogy. The film also has solid performances from the rest of the cast, who each get at least one scene in the spotlight.

Ultimately, it would be a matter of preference whether or not people see this version of Murder on the Orient Express over the original 1974 film. Kenneth Brannah does a quite decent job at telling the story, though if you already know how things turn out, the film doesn’t really add too much that is new.