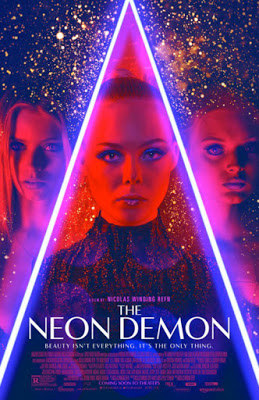 A young model finds herself the envy of the fashion industry in The Neon Demon. Jesse (Elle Fanning) is a sixteen year old woman, who has just moved to Los Angeles with the hopes of starting a modeling career. At her first shoot, photographed by new acquaintance Dean (Karl Glusman), Jesse meets make-up artist Ruby (Jena Malone), who introduces Jesse to her model friends Gigi (Bella Heathcote) and Sarah (Abbey Lee), both of whom are envious of Jesse’s natural beauty. Jesse signs with modeling agent Roberta Hoffman (Christina Hendricks) and she quickly rises through the ranks of the modeling world. However, in an industry where beauty is the only thing, Jesse’s quick rise to the top might turn out to be a very dangerous thing.

From Nicolas Winding Refn (Drive, Only God Forgives) comes this thriller set within the very shallow world of the fashion industry. As stated at one point in the film, in this world “Beauty isn’t everything. It’s the only thing.” This is exemplified by the quick rise of Jesse. As a sixteen year old lying about her age, Jesse is a symbol of the “young beauty” of an industry that believes that models should start thinking about retirement when they turn 21.

The Neon Demon can described as a horror film about the fashion industry, though it is a horror film in the same way Darren Aronofsky’s Black Swan can be described as a horror film. You have this young, innocent runaway aspiring to become a model and she ends up being eaten up by an industry that objectifies women. Jesse actually undergoes a somewhat physical transformation in the film, as her innocence is corrupted by her success in the fashion industry, with her beginning to wear more revealing outfits and make comments about how her rival models “want to be her.”
Nicolas Winding Refn is not one for being subtle and there is a certain discomfort about watching sixteen year old Jesse, played by then-sixteen year old actress Elle Fanning, be repeatedly sexualized by the fashion industry. For instance, Jesse is told to strip naked by a very macho photographer (Desmond Harrington), before being slathered with gold paint. In another scene, Jesse is doing a runway audition, with the fashion designer (Alessandro Nivola ) practically having an orgasm in response. Then there is Keanu Reeves, in a rare unsympathetic performance, playing a very rude and offensive motel manager, who might also just be a rapey pedophile. Reeves actually steals the film somewhat, since he ends up being quite over-the-top with his scuminess.
Surprising, the underage sexuality is actually the least shocking thing within The Neon Demon. The film goes full throttle in testing the comfort level of the audience, whether it be a dream sequence of Jesse felating a knife or full-on necrophilia. The Neon Demon is a film that is not that easy to enjoy and in fact, there might be something wrong with you if you do enjoy what is happening on screen.
Nicolas Winding Refn has always been known as a very stylistic director, though often at the sacrifice of substance. However, Refn’s flurry of neon lights and surreal visuals somewhat works in a film set within the world of the fashion industry. In fact, combined with a great score by Cliff Martinez, The Neon Demon is a very cinematic experience, which should be seen on the big screen.
When it all comes down to it, The Neon Demon covers the horrific objectification of the fashion industry in only a way Nicolas Winding Refn can. This film is most definitely not for everybody, but if you enjoy having your comfort level challenged, this is a film worth checking out.
8 / 10 stars

LIKED IT
The Neon Demon is available for pre-order on iTunes and will open theatrically on Friday, June 24, 2016