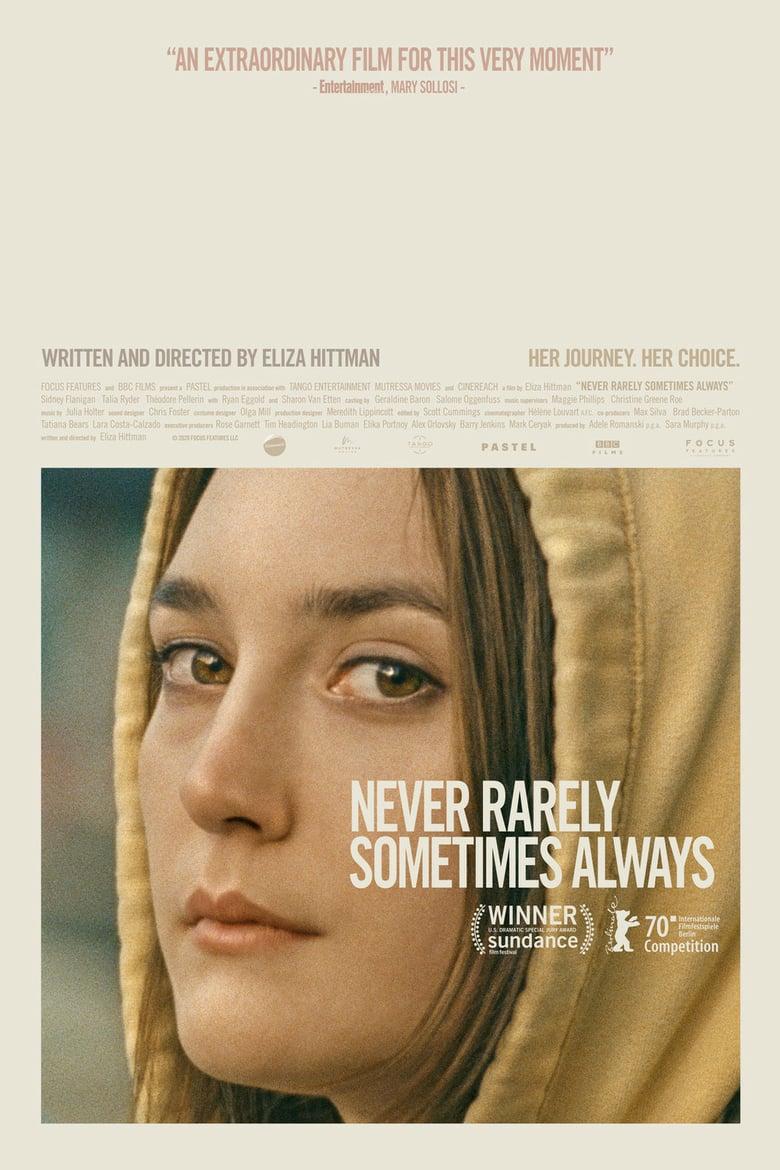 A teenage girl from rural Pennsylvania travels with her cousin to New York City to deal with an unwanted pregnancy in Never Rarely Sometimes Always. Autumn (Sidney Flanigan) is a 17-year-old girl living in a small town in rural Pennsylvania. Autumn begins to suspect that she may be pregnant, a fact that she confirms when she visits the local doctor’s office. However, with his local doctor not supporting Autumn’s desire for an abortion, she decides to travel to a planned parenthood clinic in New York City, with her being accompanied on the journey by her supportive cousin Skylar (Talia Ryder).

Never Rarely Sometimes Always is a drama written and directed by Eliza Hittman and produced by Academy Award winner Adele Romanski (Moonlight). The film introduces us to Autumn, as she is in a rotten mood following a performance in a talent show, with much of her scorn directed to an unknown boy in the crowd. We later discover that Autumn has begun to suspect that she has become pregnant, from a source who is never revealed. After discovering that the doctor’s office in her small Pennsylvania town frowns upon abortion, which includes her being shown a “Hard Truth” video, Autumn decides to make the trip to a clinic in New York City. She is joined on the trip by her cousin Skylar and along the way, they meet a guy named Jasper (Théodore Pellerin), who begins to exchange texts with Skylar.

Never Rarely Sometimes Always is a film that asks us to consider the reasons why people seek to terminate unwanted pregnancies. The title is in reference to the possible answers on a survey given to Autumn by a councillor about her sexual history leading to the pregnancy. Autumn’s answers, or lack thereof, seem to suggest that her pregnancy wasn’t caused by a consensual act, even though director Eliza Hittman makes the decision not to have us delve too much on the identity of the father and instead Never Rarely Sometimes Always focuses on the challenges and the sacrifices Autumn is going through to get this abortion. This includes the revelation that Autumn is further along in the pregnancy than she initially believed and will have to go through a multi-day procedure. The fact that Autumn and Skylar have to stay in New York City for multiple days with very little money ends up creating a bit of dramatic tension in the film and at one point they are forced to ask Jasper, a guy the two have just met, for help paying for the required train and bus fare.

It would be a bit too much to call Never Rarely Sometimes Always a pro-abortion movie, but there is hope that the film helps people understand that the decision is more than simply whether or not to keep the baby. We never really find out why Autumn got pregnant in the first place and it is that aspect alone that is enough to get viewers thinking.