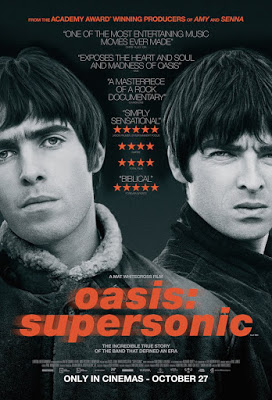 The story of the band Oasis’ quick rise from unknown signings to one of the biggest bands in the UK is retold in Oasis: Supersonic. Lead by brothers Liam and Noel Gallagher, Oasis began as a small garage band in Manchester, England. Thanks to the strong songwriting from Noel, Oasis quickly found themselves signed to Alan McGee’s Creation Records in 1993 and within three years, Oasis were playing for a quarter of million people. However, during their rise, a bitter sibling rivalry began between hotheaded Liam and independent Noel, which would eventually lead to the band’s demise.

Oasis: Supersonic is a documentary produced from the Oscar-winning team behind 2015’s Amy. Indeed, this film follows a very similar format, consisting primarily of archive footage and narrated interviews with Liam and Noel Gallagher, as well as founding bandmembers Paul “Bonehead” Arthurs and Tony McCarroll. The film delves heavily into Liam and Noel’s relationship as brothers, which was a major focal point of Oasis’ career, particularly the bitter rivalry that eventually lead to the band’s demise in 2009.

Oasis: Supersonic follows the band’s career from their formation in 1991 to the huge outdoor shows they performed in Knebworth in August 1996, which arguably marked the band’s peak. Since Oasis lasted as a band for another 13 years, I would have at least like if the film touched upon the events that lead to the band breaking up, even if was just through postscript at the end. Indeed, it can be argued that Oasis: Supersonic is primarily about the first and most successful phase of the band’s career, with the focus being on the first two albums “Definitely, Maybe” and “(What’s the Story) Morning Glory,” and the original line-up, with later members Colin “Gem” Archer and Andy Bell not getting any mention at all.

Even though I do wish that Oasis: Supersonic covered the band’s career a bit more in-depth, I was still satisfied as a fan of the band. I actually learned some facts about the band that I wasn’t aware of, such as how their 1998 single “All Around the World” was one of the first songs to be written by Noel Gallagher, with the film showing 1992 rehearsal footage of the band playing it. In fact, Oasis: Supersonic is probably worth watching for the rare archival footage alone.

While often compared to The Beatles, Oasis was a band that definitely had more of a edge to them, with their constant drug use and use of foul language. The film notes that the band became popular in a pre-digital age and that there probably will never again be a rock band that has the same quick rise as Oasis did.