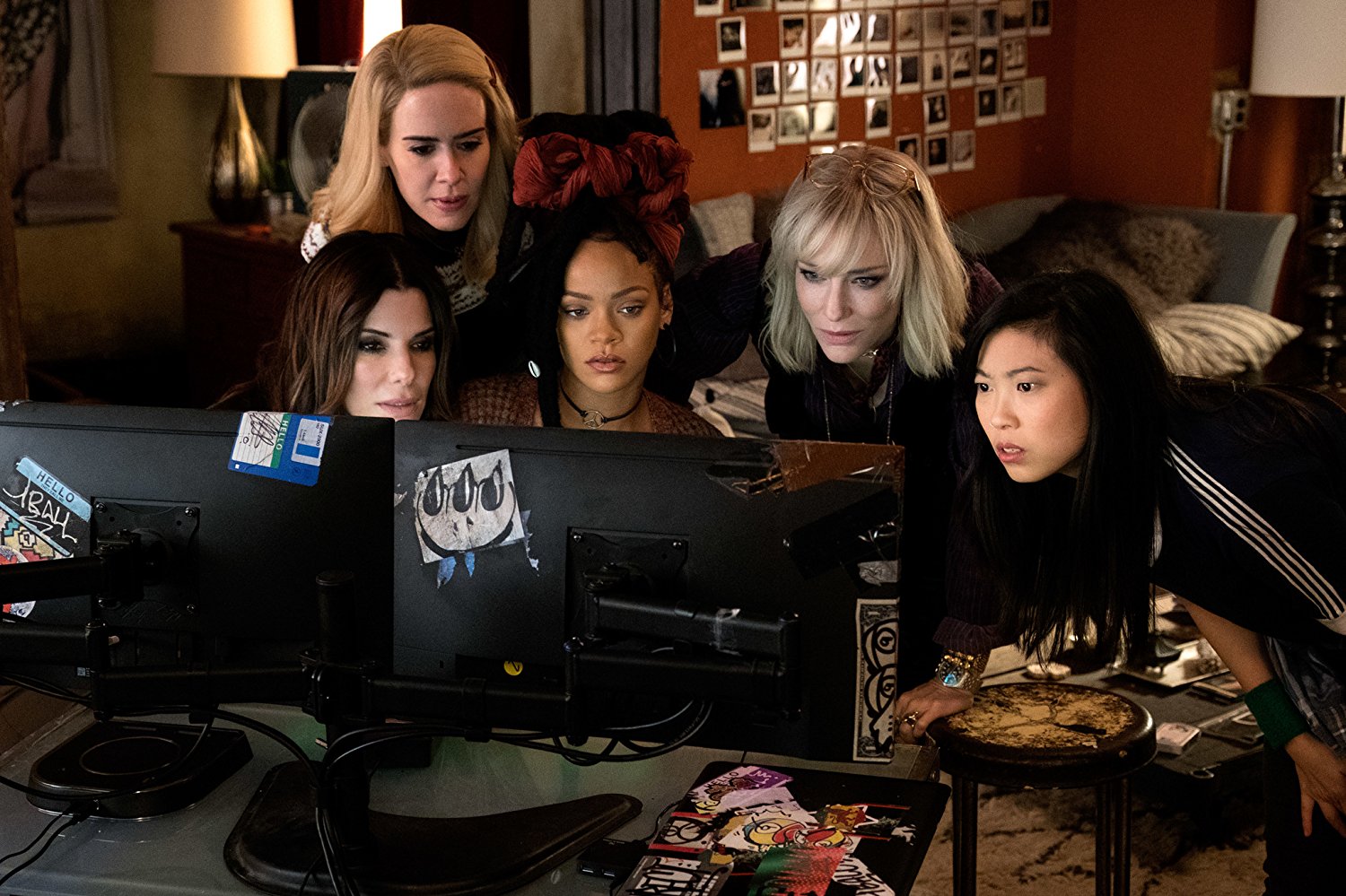 An all female gang of thieves plan a high risk diamond heist in Ocean’s Eight.  Debbie Ocean (Sandra Bullock), sister of the apparently recently deceased Danny, has just spent five years in prison, after being ratted out by her art dealer ex-boyfriend Claude Becker (Richard Armitage). It isn’t long before Debbie is reunited with her partner Lou (Cate Blanchett) and begins setting into motion a plan to rob a $150 million diamond necklace at the Metropolitan Museum’s annual gala, using ditsy celebrity Daphne Kluger (Anne Hathaway) as a pawn. Debbie and Lou put together a team of fashion designer Rose Weil (Helena Bonham Carter), jeweler Amita (Mindy Kaling), profiteer Tammy (Sarah Paulson), pickpocket Constance (Awkwafina), and hacker Nine Ball (Rihanna) and head to the Met Gala to attempt and pull off this plan.

Ocean’s Eight is an all female spin-off of Steven Soderbergh’s Ocean’s Trilogy, written and directed by Gary Ross (The Hunger Games). The plot of the film follows many similar beats of 2001’s Ocean’s Eleven, including each of new female cast members being comparable to a character from the original, particularly Sandra Bullock and Cate Blanchett stepping into the shoes George Clooney and Brad Pitt respectively. However, Ocean’s Eight can’t really be called a full-on reboot, since it acknowledges characters and events from the previous films, including a couple notable cameos. Probably the best description of Ocean’s Eight is that it is a loose sequel to the previous films that softly reboots the series.

It can be tempting to write-off Ocean’s Eight off as merely a gimmick, even though this all-female spin-off of Ocean’s Eleven is receiving nowhere close to the level of scrutiny that Paul Feig’s Ghostbusters attracted two years ago. However, it is interesting to note that Ocean’s Eight actually gives a reason for why the team is entirely female and, either way, I would say that the film is a worthy follow-up to Steven Soderbergh’s earlier films. While the bulk of the focus in the film is on Sandra Bullock, Cate Blanchett, and Anne Hathaway, all the central cast members each get their own moments to shine, including a surprising turn by a nearly unrecognizable dreadlocked Rihanna. In addition, Richard Armitage and James Corden are solid as the token males in the cast, with Armitage essential stepping into the Andy Garcia role from the previous films and Corden being a comic-relief insurance investigator.

In the end, it is probably best not to think of Ocean’s Eight as an all-female spin-off of the earlier films and just enjoy it as an enjoyable heist film in its own right.