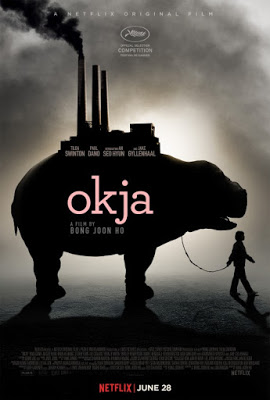 A young Korean girl tries to save her pet superpig from the slaughterhouse in Okja. Lucy Mirando (Tilda Swinton) becomes CEO of Mirando Corporation, taking over from her twin sister Nancy. Lucy’s first major announcement is the discovery of a new breed of superpig, which have been sent to 26 farms around the world, as part of a worldwide competition to be judged by zoologist Dr. Johnny Wilcox (Jake Gyllenhaal). Ten years later at a farm in South Korea, 14 year old Mija (Seo-Hyun Ahn) has developed a very close bond with her superpig Okja. However, Mija is soon devastated to learn that Okja will be taken to New York to be displayed as the winner of the competition, before being slaughtered for consumption.

Mija chases Okja to Seoul and comes in contact with the Animal Liberation Front lead by Jay (Paul Dano), who want to expose the cruel truth about Mirando’s superpig project. After a chase through the city goes viral, Lucy is encouraged by associate Frank Dawson (Giancarlo Esposito) to invite Mija to come to New York for the celebration, since a public reunion with Okja would be a great PR opportunity for the Mirando Corporation.

South Korean director Bong Joon-ho follows up 2013’s Snowpiercer with this fantastical and surprisingly dark adventure, which can be viewed as a major criticism of the food production industry. In response to a possible future food shortage, Lucy Mirando introduces the world to the supposedly recently discovered superpigs, piglets of which have been sent to 26 farms around the world. One of those farms is in South Korea, where Mija lives with her grandfather and develops a very close bond with her superpig Okja. However, when Mija learns of Okja’s eventual fate, she is willing to do anything to save Okja and bring her back to Korea.

If those that watch Okja don’t instantly become vegan afterwards, they will at least take a very long time to think about where the meat they eat comes from. The food production industry can be an inherently cruel one, with animals being mistreated before being lead to slaughter. This is quite apparent in a very hard to watch scene in the Mirando Corporation’s laboratory, where Okja is subjected to a wide variety of tests by alcoholic “animal lover” Dr. Johnny Wilcox, with Jake Gyllenhaal giving a sadistically over-the-top performance. Then there is the dual performance by Tilda Swinton as twins Lucy and Nancy Mirando, who are both cruel in completely different ways, with Lucy focused more on her public persona than the hard truth of what her company is doing.

After making his English-language debut with Snowpiercer, Bong Joon-ho opts for more of a mix with Okja, with the main story beginning in South Korea, before moving to the United States. Newcomer Seo-Hyun Ahn holds her own among the more recognizable names in the cast, which along with Tilda Swinton, Jake Gylenhaal, and Paul Dano, includes Giancarlo Esposito (Breaking Bad), Shirley Henderson (Trainspotting), Steven Yeun (The Walking Dead), and Lily Collins (Mirror Mirror).

Altogether, Okja is a fantastical adventure that would make you both laugh and cry, while probably deciding to lay off pork chops for a while.