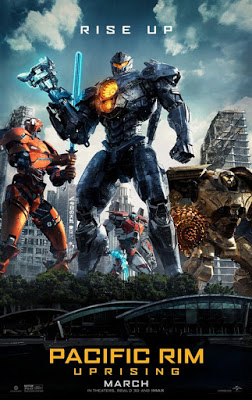 The war between the Kaiju and Jaegers resumes in Pacific Rim: Uprising. A decade has passed since the end of the war and Jake Pentecost (John Boyega) lives in the shadow of his war hero father and has fallen into a life of crime. After being apprehended along with teenage genius Amara Namani (Cailee Spaeny) following a heist, Jake is given an ultimatum by his sister Mako Mori (Rinko Kikuchi) to either serve jail time or become an instructor at the Pan Pacific Defense Corps academy in China, which reunites Jake with his old co-pilot Nate Lambert (Scott Eastwood). Meanwhile, Jaeger developer Liwen Shao (Tian Jing) is preparing to unveil drone Jaegers, developed by Dr. Newton Geiszler (Charlie Day), which will remove the need for pilots. However, something goes horribly wrong as the drones gain a mind of their own and prepare to reopen the breach to the homeworld of the alien race known as Precursors.

Five years after Guillermo del Toro’s homage to giant monster movies comes the sequel Pacific Rim: Uprising. While this sequel was original meant to be directed del Toro, he left the project while it was in pre-production to direct the Oscar-winning Shape of Water. In his place is writer/director Steven S. DeKnight, who has been primarily known up to this point as a writer and producer of various TV series, such as Dollhouse, Spartacus, and Daredevil. It is unknown how much of Guillermo del Toro’s vision for a sequel remains in Pacific Rim: Uprising, despite the fact that he retains a producer credit.

Taking place ten years after the original, Pacific Rim: Uprising can also be described as Pacific Rim: The Next Generation, since much of the plot of the film involves the training of new young Jaeger pilots. The only characters who return from the original are Rinko Kikuchi’s Mako Mori, Charlie Day’s Dr. Newton Geiszler, and Burn Gorman’s Dr. Hermann Gottlieb. Instead, the film focuses on new characters, ranging from veterans such as Jake Pentecost and Nate Lambert to young recruits like Amara Namani.

Pacific Rim: Uprising is the type of sequel that I don’t like, which features much retroactive continuity that will actually change the way you watch the original film. Also while I’m sure comparisons to Transformers were present in the original, Pacific Rim: Uprising essentially goes all in with turning this film into a Transformers clone, making sure to namedrop all the Jaeger in the film, which are sure to sell a lot of toys.

It is also quite obvious that this sequel is specifically produced to cater to the growing Chinese market. This includes having Chinese characters central to the story, such as Tian Jing as Liwen Shao and Jin Zhang as Marshal Quan. This increased Chinese involvement almost comes at the expense of Japanese actress Rinko Kikuchi, who has gone from major character to glorified cameo. At least Kikuchi makes an appearance in the film, as opposed to the completely absent Charlie Hunnam.

Perhaps I am nitpicking too much, however in the end Pacific Rim: Uprising is merely a cash-in sequel meant to sell toys and make big box office in Asia.