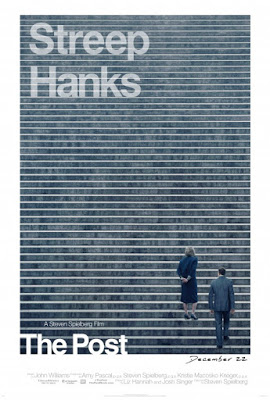 The publishing of a government cover-up results in a battle for the freedom of the press in The Post. Kay Graham (Meryl Streep) is the publisher of The Washington Post and works with editor Ben Bradlee (Tom Hanks) in the day to day operations. Kay is under much scrutiny for being the first female publisher of the paper, especially as preparations are being made for an IPO. Things become more stressful for both Ben and Kay when the New York Times publish excerpts from a leaked study put into motion by former Secretary of Defense Robert McNamara (Bruce Greenwood), revealing a cover-up about the Vietnam War spanning four U.S. Presidents. When assistant editor Ben Bagdikian (Bob Odenkirk) locates the source of the “Pentagon Papers,” Kay has to decide whether or not to publish the papers or risk going to prison.

Two years after the Oscar-winning Spotlight comes another newspaper set drama, co-written by Spotlight screenwriter Josh Singer, this time focusing on the publishing of the Pentagon Papers in the early 1970s. Steven Spielberg takes the helm of The Post, teaming up for the fifth time with Tom Hanks as Washington Post editor Ben Bradlee. However, the true star of the film is Meryl Streep, in her first collaboration with Spielberg, The Washington Post’s publisher Kay Graham. Kay inherited the paper from her late husband and under much scrutiny by her board members, particularly Arthur Parsons (Bradley Whitford) and Fritz Beebe (Tracy Letts), for being a female in charge of the newspaper, right as it is preparing for an IPO on the American Stock Exchange. Things become much more tenuous when The Pentagon Papers are leaked by the New York Times and the question is asked whether The Washington Post should follow suit and risk prosecution. The results in a very stressful week for everyone involved with this paper.

A film such as The Post couldn’t have come at a better time, since the United States is currently governed by a president, who repeatedly criticizes the media and has made “Fake News” a buzzword. Ultimately, The Post is about the fight for the right to publish, which is protected under the first amendment of the U.S. constitution. In the case of The Pentagon Papers, it was a very delicate situation for The Washington Post, since they wanted to reveal the government cover-up about the Vietnam War, without revealing sensitive information that would endanger American lives.

As expected, The Post features strong lead performances by both Tom Hanks and Meryl Streep. Streep in particularly gives a very complex performance as a female publisher, who almost wants to prove herself to the patriarchy. There is a standout supporting performance by Bob Odenkirk, who has his own sidestory in the film, as he tracks down the source of the leak.