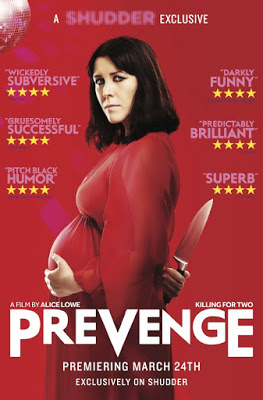 A pregnant woman seeks vengeance against those responsible for the death of her husband in Prevenge. Ruth (Alice Lowe) is a window, whose husband died in a climbing accident, after being cut loose by those he was climbing with. At the same time she found out about her husband’s death, Ruth also discovers that she is pregnant. As her pregnancy nears its completion, Ruth begins hearing the voice of her unborn child, who urges Ruth to kill those who have declined the child a father.

Actress Alice Lowe (Sightseers) makes her directorial debut with this dark comedy about a pregnant woman, who takes bloody revenge against those responsible for the death of her husband. From the moment she performs her first kill, it is apparent that Ruth is a woman that isn’t right in the head, particularly when it is revealed that the voice of her unborn child is instructing Ruth. Tracking down everybody involved with the climbing accident that killed her husband, Ruth wants to make sure that they all pay for “cutting the cord” and costing her husband his life.

There is almost a bit of a Kill Bill feel to the structure of Prevenge, as Ruth visits her victims one by one, including party animal DJ Dan (Tom Davis), cutthroat business woman Ella (Kate Dickie), and the super athletic Len (Gemma Whelan). At the top of Ruth’s hit list is her husband’s climbing instructor Tom (Kayvan Novak), who is likely the one that actually did the deed.

Prevenge draws a fine line between having Ruth be a cold blooded serial killed, while also remaining a sympathetic character. In many ways, the film as a whole can be seen as a metaphor for the many anxieties women go through during pregnancies. Indeed, Ruth is shown having multiple checkups during the film, in which it is mentioned that she no longer has control over her body. In fact, the disembodied voice of Ruth’s child is almost a character herself, with the voice’s frequent insults to Ruth resulting in her being afraid to have the baby.

The comedy of Prevenge is not really laugh out loud funny, however there is a dark humour that surrounds Ruth’s murders, whether it be her giving quite obvious puns or her unexpectedly lactating at the sound of sirens. Alice Lowe was truly pregnant at the time of filming and she ends up creating perhaps one of the most unique revenge films you would ever watch.

If you are a fan of Alice Lowe’s performance in Ben Wheatley’s Sightseers, which she co-wrote, then Prevenge is most definitely the type of film for you.