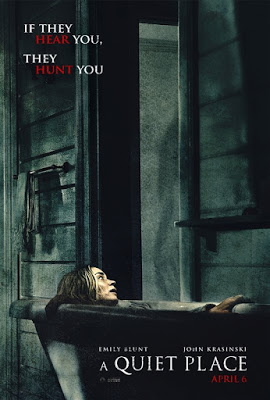 A family tries to take shelter from sound sensitive creatures in A Quiet Place. The world has been ravaged by creatures, who hunt by sound. Lee Abbott (John Krasinski) and his wife Evelyn (Emily Blunt) struggle to survive in silence with their children Regan (Millicent Simmonds), Marcus (Noah Jupe), and Beau (Cade Woodward). However, a combination of personal tragedy and the fact that Evelyn is soon to give birth threatens to expose the family to these creatures.

Actor John Krasinski steps behind the director’s chair and stars alongside his wife Emily Blunt is the post-apocalyptic horror film A Quiet Place. The films follows a single family as they attempt to survive an attack by sound sensitive creatures. As a result, the family lives in complete silence, communicating with each other through sign language. Following a tragic effect early on, Lee and Evelyn have a somewhat estranged relationship with their deaf oldest daughter Regan, who is filled with extreme guilt over what happened.

Films that quickly come to mind in comparison to A Quiet Place are 2016’s Don’t Breathe, as well as The Descent. However, one element that sets A Quiet Place apart is the film’s careful use of sound, which having practically little to know dialogue. Every sound heard in the film is important to the otherall plot and it really helps with building tension, since you know that any loud noise will attract the creatures.

With the bulk of the focus being on the family, A Quiet Place doesn’t really feel the need to provide needless exposition. The film begins with this apocalyptic event well in progress, with only newspaper clippings on Lee’s wall providing background information about the creatures. Even the creatures themselves are somewhat inconsequential, with their defining feature being their keen sense of hearing and having a whole lot of teeth.

It is definitely a brave choice to release a major film that is practically completely silent, with only about two scenes with dialogue. In addition to the leading roles of Emily Blunt and John Krasinski, A Quiet Place is also a showcase for young deaf actress Millicent Simmonds, who is a major focus on the plot of the film.

A Quiet Place is a horror film that is a lot more about building tension than having needless jump scares and it’s better for it. It’s also a film that encourages those watching it to be quiet, which is a plus in of itself.