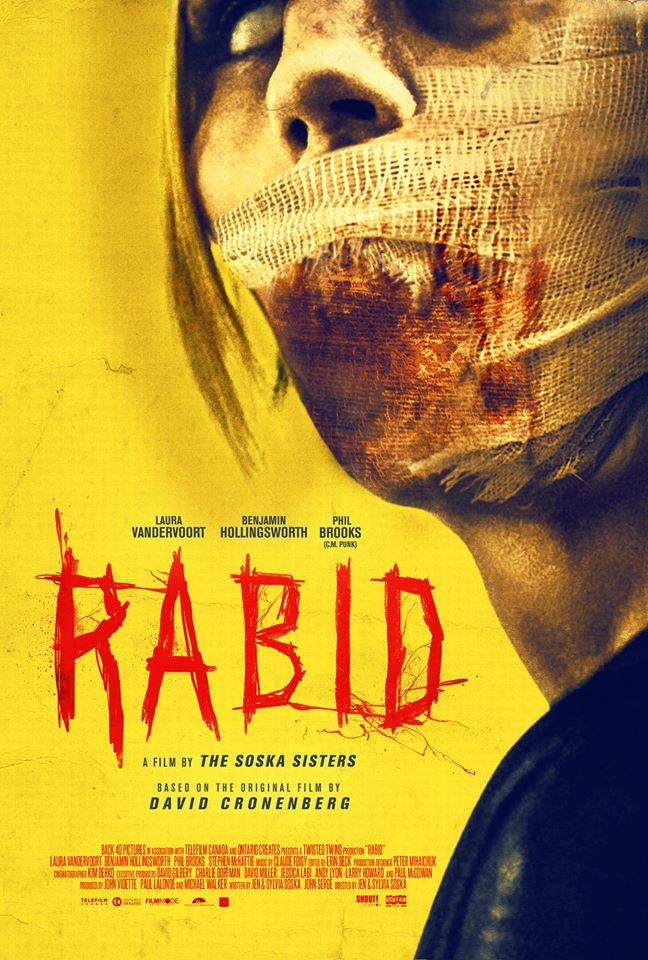 The Soska Sisters reimagine the original David Cronenberg classic with Rabid. Rose (Laura Vandervoort) is a meek assistant to fashion designer Gunter (Mackenzie Gray), who shows little attention to Rose’s designs. Going to a party with photographer Brad (Benjamin Hollingsworth), Rose ends up feeling humiliated when she finds out that the date was arranged for by her model friend Chelsea (Hanneke Talbot). However, as she runs off in embarrassment, Rose is struck by a car, leaving her face horribly disfigured. During her recovery, Rose is contacted by Dr. William Burroughs (Ted Atherton), who offers to perform and experimental skin grafting technique, using stem cell manipulation. However, while the procedure is successful at restoring Rose’s face, it turns out to have some unwanted side effects.

Eight years after their 2012 breakthrough film American Mary, the twisted twin filmmaking duo of Jen and Sylvia Soska set out to remake the 1977 classic by David Cronenberg. One of the earliest films in Cronenberg’s filmography, the original Rabid was controversial for not only its depictions of sex and violence but also through the casting of adult film actress Marilyn Chambers. The Soskas decided to go in a decidedly more mainstream direction when it came to casting, choosing Toronto actress Laura Vandervoort (Smallville, V) to play the lead role of Rose.

While the new Rabid follows the basic beats of Cronenberg’s original, the Soskas reframe the story through the female gaze. Specifically, the film deals with body image, particularly in the cutthroat world of the fashion industry. The procedure to fix Rose’s face negates to need for her to wear glasses, which consequently results in her receiving a lot more attention from Gunter, who wants her to design a dress for his upcoming collection. However, another more deadly side effect of the procedure is the thirst for blood, with Rose’s victims coming back as rabid zombies.

With the exception of their work-for-hire WWE Studios releases See No Evil 2 (2014) and Vendetta (2015), Rabid is the first feature film co-written and directed by the Soska Sisters since American Mary back in 2012. Despite the duo obviously having a huge reverence for David Cronenberg, it was a risky venture for them to jump into a remake of Rabid, instead of pursuing something original. However, it becomes apparent over the course of Rabid that the Soskas are in fact doing something original and in some ways, this new film ends up much more messed up than the Cronenberg original.

Probably one of the key visuals of Rabid is the gruesome disfigurement of Rose’s face after her accident, which definitely leaves an impression, despite relatively little screentime. Those who are familiar with the David Cronenberg original will likely have a good idea of what the side effects of Rose’s procedure are, but the Soskas keep things interesting by going in new and interesting directions. There are also subtle references to David Cronenberg’s other works spread throughout the film, with the most prominent being the Dead Ringers-like red scrubs worn by Dr. Burroughs, whose name itself is a reference to the author of Naked Lunch.

The Soska Sister’s pro wrestling fandom is at play with the casting of Phil “C.M. Punk” Brooks in a small but notable role in Rabid, with his wife (and fellow ex-wrester) A.J. Mendez also making an appearance. The film also features an appearance by the Soskas’ muse Tristan Risk and notable cameos by Stephen McHattie and “Twisty” Troy James.

Overall, while I would say that it’s impossible for the Soska Sisters’ Rabid to top the David Cronenberg original, they are still successful at reimagining the story into something new and original, which is definitely something to compliment them for, especially since the end result is probably more messed up than what Cronenberg did in 1977.