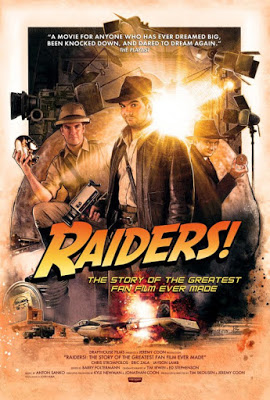 It was in 2008 when Michel Gondry’s film Be Kind Rewind introduced the term of “sweding,” referring to the film’s self-made remakes of popular films.  In essence, these kids in the 1980s were making a sweded version of Raiders of the Lost Ark, decades before that term was in the public consciousness.


Raiders! recounts both the making of Raiders of the Lost Ark: The Adaptation, while also following Eric Zala and Chris Strompolos as they attempt to finish the project by shooting the 124 shot airplane sequence.  The film also features interviews with the likes of Eli Roth, Harry Knowles, and even sage advice by John Rhys Davies.
Simply put, Raiders! is just pure awesomeness, particularly when it comes to the incredibly hilarious footage of this fan film.  It is crazy how far these kids went to remake Raiders of the Lost Ark, complete with them performing dangerous stunts, with barely any adult supervision.  Then there’s the drama surrounding Eric and Chris’ efforts to finish the project, which goes wrong in possibly every way imaginable, including constant rain, a ticking clock and a very shocking “Oh my God” moment.

This remake of Raiders of the Lost Ark was both a passion project and refuge for these three individuals, who all had somewhat troubled lives, particularly Chris, who has a history of drug addiction. It is almost by a fluke that the remake became a cult success, as tapes were passed around, eventually landing in the hands of Eli Roth, who deciding to bring it to Harry Knowles’ annual Butt-Numb-A-Thon event, with the rest becoming history as they say.

Probably one of the biggest messages to come out of Raiders! is that you shouldn’t give up on your dreams, even if it is a remake of Raiders of the Lost Ark you made during your childhood. Altogether, Raiders! is a very entertaining and even touching look at these individuals setting out to fulfil this dream.

Raiders!: The Story of the Greatest Fan Film Ever Made opens today at the Cineplex Varsity and Yonge and Dundas cinemas.