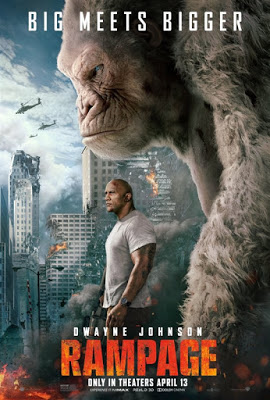 The popular arcade game hits the big screen with Rampage. The genetics company Energyne headed by Claire Wyden (Malin Akerman) has developed a pathogen called CRISPR that edits the DNA of all animals that come in contact with it. After the explosion of Energyne’s outer space laboratory, three samples of the pathogen crash land to Earth, infecting a wolf, a crocodile, and George, a rare albino ape being cared for by primatologist Davis Okoye (Dwayne Johnson). With the animals growing to monstrous proportions and gaining heightened aggression, David teams up with former Energyne scientist Dr. Kate Caldwell (Naomie Harris) to stop the mutant animals before they reach and destroy Chicago.

Dwayne Johnson reunites with director Brad Peyton (San Andreas) for this film based on the popular 1986 Bally Midway arcade game. While the game solely focused on the mindless carnage of giant monsters destroying cities, Rampage comes up with a new story involving an evil genetics corporation, whose creation is accidentally unleashed onto America. The sudden arrival of these monsters attracts the attention of government agent Harvey Russell (Jeffrey Dean Morgan), as well as a private military group lead by Burke (Joe Manganiello).

As a kid, I had quite a lot of fun playing the Rampage video game, with its three monster protagonists of George, Ralph, and Lizzie, with two of those names being dropped in the film. However, I would probably be the first to admit that Rampage is an odd choice to adapt to the big screen, since there is really no story to the video game, other than destroy every building in sight, while avoiding the army. While I can excuse the fact that the filmmakers choose the make the monsters mutated animals, as opposed to the mutated humans of the video game, I do think the story of Rampage is a little bit on the convoluted side. I particularly wasn’t a fan of the figurative mustache twirling of Malin Akerman as evil Energyne CEO Claire Wyden.

Rampage doesn’t actually get to the city destroying until the third act, which is somewhat fun to watch, even though it is difficult watching such wanton death and destruction in this day and age, which is a similar response I had to Brad Peyton’s San Andreas. At least I can say that Jeffrey Dean Morgan was fun to watch as smarmy government agent Harvey Russell.

Overall, while Rampage delivers on the mindless entertainment, I would much rather just play the video game.