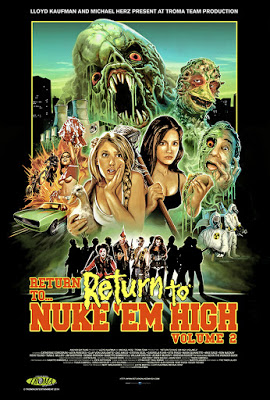 From Troma Entertainment comes the conclusion of the two part re-imagining of the original 1986 film with Return to… Return to Nuke ‘Em High AKA. Vol 2. Picking up directly where the first volume leaves off, Tromaville High School students Chrissy Goldberg (Asta Paredes) and Lauren (Catherine Corcoran) become privy to a plan by the evil Tromorganic Foodstuffs Conglomerate headed by Lee Harvey Herzkauf (Lloyd Kaufman), who has contaminated the student body with toxic tacos. Chaos begins to reign at the school by the singing post-apocalyptic gang The Cretins, giant mutated monsters, and Kevin the Wonder Duck.

Having watched both films back-to-back, I can fully contend that it would have been fully possible to tell this story in a single film, since all that Return to Nuke ‘Em High Volume 1 truly accomplishes is that it establishes all the characters, when the film is not featuring the typical Troma tropes of gratuitous violence, sex, and nudity. Since Return to… Return to Nuke ‘Em High AKA. Vol 2 starts off with a full recap of the previous film, it is almost unnecessary to watch Volume 1, since it is in this film where the plot truly sets in motion. In fact, it is almost a joke in Volume 1 that the film ends with a “To Be Continued” right as the plot begins to thicken.

I probably don’t need to get too deep into the plot of Return to… Return to Nuke ‘Em High AKA. Vol 2, since the story is ultimately just a way to move to the next scene of gratuitous sex or violence. Lloyd Kaufman has never been afraid of pushing buttons, with probably every taboo act known to man shown on screen at one point or another. Probably the very fact that the leads are a lesbian couple, who have lengthy softcore sex scenes in BOTH volumes says it all.

Return to… Return to Nuke ‘Em High AKA. Vol 2 is full of pop culture references and cameos. This includes spoofs of Carrie, Silence of the Lambs, and Slumdog Millionaire and appearances by Motörhead singer Lemmy, filmed before his 2015 death, Stan Lee, and even the Angry Video Game Nerd. I should also note, as a possible argument to how Return to Nuke ‘Em High could have been trimmed down to one film, there seems to be a lot of filler in this film. Specifically, there is a recurring gag, where the film will suddenly cut to a morning talk show. While likely part of Lloyd Kaufman’s self-referential sense of humour, which also includes a scene with fake director’s commentary, I did note that the film does cut to the talk show and/or a news broadcast one too many times.

Lloyd Kaufman has been making films under the Troma Entertainment banner for nearly 45 years now and at 72 years of age, he shows no signs of slowing down. Make no bones about it, Return to… Return to Nuke ‘Em High AKA. Vol 2 is Trash with a capital T. However, there is a certain charm to Lloyd Kaufman’s trashy sensibility and there is no denying that this is an entertaining film to watch with a crowd (if you can). I do recommend skipping Volume 1 though, unless you absolutely want to watch 90 minutes of set-up and duck rape.