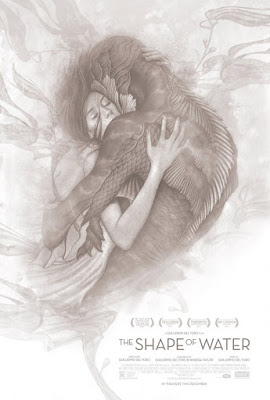 A mute cleaning woman befriends and tries to help an amphibious creature in The Shape of Water. Elisa Esposito (Sally Hawkins) is a mute and lonely woman, who lives in apartment above a cinema in 1960s Baltimore and takes care of her neighbour Giles (Richard Jenkins). Elisa works with her friend Zelda Fuller (Octavia Spencer) as a janitor at the Occam Aerospace Research Center. It is there that Colonel Richard Strickland (Michael Shannon) and scientist Dr. Robert Hoffstetler (Michael Stuhlbarg) bring in an amphibious man (Doug Jones) captured in South American for study. While Strickland treats the creature extremely cruelly, Elisa finds herself being able to communicate and befriend it. When it becomes apparent that the Amphibian Man’s life is in danger at the lab, Elisa enlists the help of Giles to save the creature.

Guillermo del Toro returns to his roots with the Cold War-set fantasy The Shape of Water. Featuring a story reminiscent to 2006’s Pan’s Labyrinth, The Shape of Water focuses on an unlikely connection developed between a lonely and mute woman and an amphibious creature. The film simultaneously can be considered a Cold War thriller, while also featuring elements of classical Hollywood romances, including a full on musical dance sequence.

Guillermo del Toro’s longtime collaborator Doug Jones brings life to the “Amphibian Man,” who bares more than a few similarities to Jones’ character of Abe Sapien from the Hellboy films, while also sporting some elements of the Creature from the Black Lagoon. Despite all the prosthetic make-up, Jones gives much life to the character, despite the fact that he does not say a word. The same can be said for Sally Hawkins, who arguably delivers her best performance since her 2008 breakthrough Happy-Go-Lucky. In some ways, it can be said that Hawkins is channeling Audrey Tautou’s performance from Amélie, with The Shape of Water as a whole having a real European feel to it.

The Shape of Water is at its best when Guillermo del Toro goes all in on the fantastical romance that is at the centre of a plot. Despite being of two separate species, the connection felt between Elisa and the Amphibian Man is completely believable. In addition, the film has strong supporting performances by Richard Jenkins and Octavia Spencer. While Michael Shannon is delivering the typical villainous role that he has become known for, he does serve a necessary aspect of the plot.

While he become equally known for big blockbusters like Pacific Rim, a fantastical character-based film such as The Shape of Water is where Guillermo del Toro is at his strongest. This film is without a doubt his best work since Pan’s Labyrinth and I hope he has more films like this within his imagination.