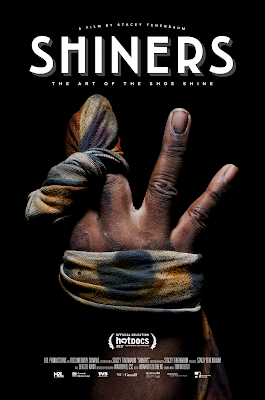 Various shoe-shiners are profiled in Shiners. All over the world, you will find people who make it their living to shine shoes. In New York, Don has been shining on the streets for fifteen years. In Toronto, Vincent shines shoes part time in a barbershop. In Sarajevo, Ramiz hopes to follow in the steps of his father. Despite a negative public perception of shoe shiners, these people talk about the pride they have shining shoes.

Shiners is a relatively straight forward documentary, which moves between various shoe shiners across the world. Some like Don are very open and proud about their occupation, while others have to wear masks to avoid discrimination. About a half dozen or so shoe shiners are profiled throughout the film, with them talking about their experiences in this profession.

While I do have to say that some of the subjects in Shiners are quite interesting, such as Don, the film does get old fast. Even though this documentary is only 78 minutes long, it still seems to be too long for its subject manner. While Shiners would have made a great short, there really isn’t all that much to talk about shoe shining, which holds my interesting for an entire feature length doc.