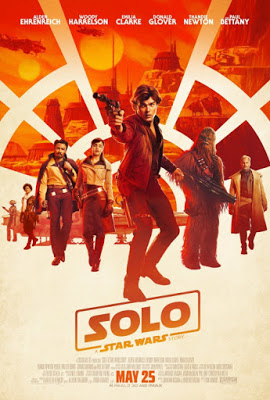 The origins of Han Solo are told in Solo: A Star Wars Story. After escaping from a life of servitude on the planet Corellia, Han Solo (Alden Ehrenreich) finds himself a member of the Imperial Army. It is there that he meets the Wookie Chewbacca (Joonas Suotamo), as well as the scoundrel Tobias Beckett (Woody Harrelson), who is planning a heist with his crew of Val (Thandie Newton) and Rio (Jon Favreau), which Han and Chewie are recruited to participate in.

When the heist goes sour following the interference by pirates, Tobias has to find a way to make things square with crime lord Dryden Vos (Paul Bettany) of the Crimson Dawn syndicate. It is on Dryden’s yacht where Han is united with his former lover Qi’ra (Emilia Clarke) and together with Beckett recruit pilot Lando Calrissian (Donald Glover) of the Millennium Falcon to perform a very dangerous heist.

Solo: A Star Wars Story is second film of the Star Wars anthology films, following 2016’s Rogue One. The film was originally set to be directed by Phil Lord and Christopher Miller (21 Jump Street), but they were fired in the middle of production and replaced by Ron Howard, who reshot much of the film and now receives the sole directorial credit (with Lord and Miller getting Executive Producer credits). I’m not really sure what Lord and Miller’s version of this story would have been like, but apparently it was there use of a much more comedic tone that ended up rubbing producer Kathleen Kennedy the wrong way.

I can’t really say that I was all that excited to see a Han Solo origin story on the big screen. While Rogue One ended up being a nice little stand-alone spin-off film, Solo seems to be the first proper example of the Disney-owned Lucasfilm giving the Star Wars universe a similar treatment to the Marvel Cinematic Universe. This includes hinting at further films involving the young Han Solo, including a cameo from a past Star Wars villain that nobody expected to see again.

However, even though Solo is a completely unnecessary film, it is completely fine for what it is. Just like Rogue One had the feeling of being a war film, Solo is very much a heist film, mixed with being a western. In fact, I believe this is the first Star Wars film to not really have any references to the Jedi or the Force. As such, there is a lot more outer space gunslinging.

While Solo: A Star Wars Story is not a film I dislike, it is also the first sign of over-saturation for the Star Wars franchise.