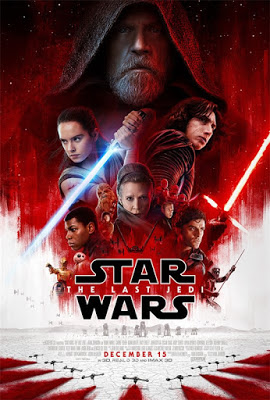 Note: Every effort will be made to avoid major SPOILERS, but please be advised that certain aspects of the plot will be revealed in this review.


The First Order strikes back against the Resistance in Star Wars: The Last Jedi. As the First Order lead by Supreme Leader Snoke (Andy Serkis), Kylo Ren (Adam Driver), and General Hux (Domhnall Gleeson) approach, the Resistance lead by Leia Organa (Carrie Fisher) are forced to retreat. When Leia is injured in an attack, her command is assumed by Vice Admiral Holdo (Laura Dern), whose passive approach is met with criticism by Poe Dameron (Oscar Isaac). In an effort to try an disable the First Order’s ability to track their ship, Finn (John Boyega) and maintenance worker Rose Tico (Kelly Marie Tran) sneak off to recruit the mysterious scoundrel DJ ( Benicio Del Toro) to break them into the lead Star Destroyer.

Meanwhile Rey (Daisy Ridley) has tracked down the Last Jedi Luke Skywalker (Mark Hamill), who has been living in exile on the isolated planet of Ahch-To, home to the first Jedi Temple. After his failure teaching Ben Solo the ways of the Force, resulting in Ben’s transformation into Kylo Ren, Luke has become disillusioned with the ways of the Jedi. However, he reluctantly agrees to give some lessons to Rey, if only to convince her why the Jedi must end.

Rian Johnson (Brick, Looper) takes the helm of Episode VIII of the Star Wars saga, which is primarily focused upon the return of the long-lost Luke Skywalker. The film continues the hero’s journey of Rey, who seeks out teaching from Luke after discovering her sensitivity with the Force. Rey’s journey runs parallel to the dark side journey of Kylo Ren, who hasn’t exactly been meeting the expectations of Supreme Leader Snoke. Rey comes to believe that there is a chance for Kylo Ren to come back to the light.

At a running time of 2h 32m, Star Wars: The Last Jedi has the distinction of being the longest Star Wars film to be released. However, I would argue that the film didn’t really need all the side adventures that make up the first half of the film, telling separate stories focused on Rey, Finn, and Poe Dameron. It isn’t really until the last hour or so of the film when the stories converge into what amounts to be a very entertaining last act of the film.

When he came on board as director, Rian Johnson opted to write The Last Jedi from scratch and some the decisions he made play with viewer expectations. With The Force Awakens having a plot structure quite reminiscent of A New Hope, it would be easy to assume that The Last Jedi would be modeled after The Empire Strikes Back. This is true in some aspects, but there are also elements of Return of the Jedi, as well as some completely new ideas. One thing I can confidently say is that following the events of this film, I have no idea where they are going to go with Episode IX, especially how they’ll address the death of Carrie Fisher, who has a front and centre role for most of this film.

Even though I have been a big fan of Rian Johnson since his debut film Brick a dozen years ago, I do have to contend that Star Wars: The Last Jedi is an entertaining film, but it is far from perfect. While probably not fair to compare films of this new trilogy to the prequels, the issues I have with The Last Jedi are similar to the ones I had with Attack of the Clones, in which all the major characters separated into their own mini adventures, before converging in the climax. Did we really need to have a sequence on a casino planet, with the sole purpose being to introduce Benicio Del Toro’s character? We also didn’t need a somewhat meaningless appearance by Lupita Nyong’o as Maz Kanata via expositionary video message.

I don’t really want to complain too much about Star Wars: The Last Jedi, since I ultimately liked the film. However, if I rank the films of the saga, this film is firmly somewhere in the middle.