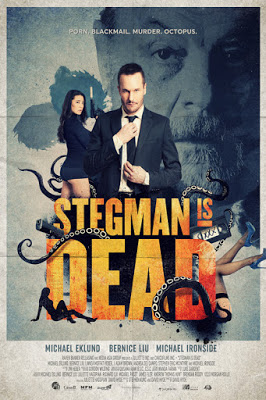 Stegman is Dead is dark comedy about porn, blackmail, murder….and octopus. At the centre of the story is Gus, who is trying to move on from a life of crime, much to the dissatisfaction of his wife Diane (Andrea del Campo), who is ready to leave Gus and take their daughter Angela (Linnea Moffat). The marital problems are exasperated when Gus is contacted by Don to locate the stolen tapes, with the added stakes that they implicate Gus in the (accidental) murder of two security guards. At the same time as Gus, other members of Don’s crew are also looking for the tapes, including his sons Jesse (J. Adam Brownand) and Sal (Aidan Ritchie), muscle Sergei (David Lawrence Brown), and cleaner Kruger (Stephen Eric McIntyre).

As the obligatory name actor in the cast, it is obvious that Michael Ironside shot most of his scenes within a couple days, with the bulk of Don’s scenes involving him sitting in his office and either talking to Gus on the phone or arguing with his two sons. Michael Eklund is relatively unremarkable in the role of Gus, though he does have some cute interactions with the young actress playing his daughter.

Ultimately, Stegman is Dead is a film that obviously wants to be a cool Tarantino-esque crime film, but it doesn’t have the script to match its ambitions. At the very least, the film provides Michael Ironside with a paycheque.