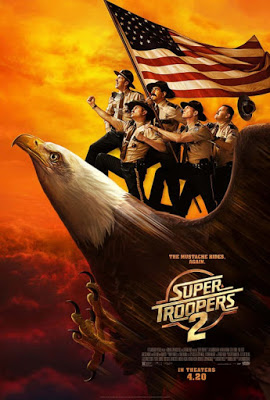 The officers of the Vermont State Police are back in business in Super Troopers 2. After losing their jobs as both state troopers and local police, the team of Arcot “Thorny” Ramathorn (Jay Chandrasekhar), Jeff Foster (Paul Soter), MacIntyre “Mac” Womack (Steve Lemme), Robert “Rabbit” Roto (Erik Stolhanske), and Rodney “Rod” Farva (Kevin Heffernan) are called back into duty by their old captain John O’Hagen (Brian Cox) after it was discovered that the Vermont border extends into a Quebec border town. The troopers are assigned to assist mayor Guy Le Franc (Rob Lowe) and cultural attaché Genevieve Aubois (Emmanuelle Chriqui) with the transition of the town from Canada to the United States, much to the chagrin of the soon to be reassigned Mounties Bellefuille (Tyler Labine), Archambault (Will Sasso), and Podien (Hayes MacArthur).

After 17 years, the Broken Lizard comedy troupe finally arrive with a sequel to their 2001 cult comedy. As the original film closed, the Vermont State Police were shut down and the former troopers joined the local police force. However, it turns out that they lost their police jobs, following a ride along incident with Fred Savage, and now find themselves in menial jobs. However, they are soon surprised to find out that Vermont governor Jessman (Lynda Carter) has reinstated the State Police to help with a border transition. However, the Canadian locals don’t really take too kindly to these American troopers invading on their soil.

It can probably be safe to say that Broken Lizard were never really critical or box office darlings, even though the cult success of Super Troopers lead to more films from the troupe to be produced, such as Club Dread (2004), Beerfest (2006), and The Slammin’ Salmon (2009), though they never reached the same level of cult fandom as Super Troopers. Even though a sequel was always on the back-burner, it wasn’t until a 2015 crowdfunding campaign when Super Troopers 2 finally started to become a reality.

There have been many cases in recent years of films receiving sequels many years after the fact, with the result often being that the follow-up has come too late. I do have to say that this is partially the case with Super Troopers 2, which is for all intents and purposes a rehash of the plot of the first film, with a lot of jokes based on Canadian stereotypes (and bad French-Canadian accents) thrown in. However, the story was never the most important part of Super Troopers and I do have to say that this film is indeed quite funny at times. In addition, Broken Lizard’s penchant for stunt casting continues with Rob Lowe joining the returning Brian Cox in a featured role, with there also being some notable cameos in the film.

Altogether, if you enjoyed the first film, there is a chance that you will find stuff to like in Super Troopers 2, even though it is ultimately a much lesser film.