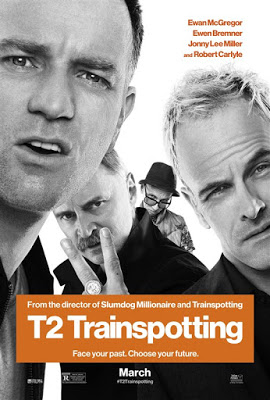 Danny Boyle returns to the characters from Irvine Welsh’s novels two decades later in T2 Trainspotting. After living in Amsterdam, Mark Renton (Ewan McGregor) returns to Edinburgh twenty years after stealing the money from a drug deal and is reunited with his old friends Daniel “Spud” Murphy (Ewen Bremner) and Simon “Sick Boy” Williamson (Jonny Lee Miller), who are both resentful of the betrayal. Not having anything better to do, Mark reluctantly agrees to help Simon with his plan to open a brothel and he strikes up a relationship with Simon’s Bulgarian “partner” Veronika Kovach (Anjela Nedyalkova). However, a wrench is thrown into the plans as Francis Begbie (Robert Carlyle) has escaped from prison and wants violent revenge against Mark.

With T2 Trainspotting, Danny Boyle has directed a very self-aware sequel that almost knows that it is being made out of nostalgia for the original. There is a heavy use of flashbacks in the film, which includes both moments from the original film, as well as new scenes showing the four friends in their childhood and teenage years. The score of the film features allusions to both “Lust for Life” and “Born Slippy,” which were hits from the original’s soundtrack. There are even cameos of the characters from the original played by Kelly Macdonald, Shirley Henderson, and Irvine Welsh himself.

As a huge fan of the original, it is hard for me to watch T2 Trainspotting and not feel a little bit disappointed. The film is fine for what it is and very are many entertaining moments throughout, however it is no where near the original in terms of quality. It almost seems odd for Ewan McGregor to return to playing former heroin junkie Mark Renton, after a career that saw him play Obi-Wan Kenobi of all characters. Jonny Lee Miller and Ewan Bremner settle back into their roles a bit easier, despite the quite obvious aging of both. However, the standout performance of the film is undoubtedly Robert Carlyle, who really brings his A game, as he reprises Francis Begbie as a fully unhinged psychopath, who also has a bit of a soft spot hidden under his gruff exterior.

Like most sequels made twenty years later, T2 Trainspotting is a film that probably didn’t need to happen. However, the film still has its moments, as we revisit these middle-aged junkies, who still don’t really know what to do with their lives.