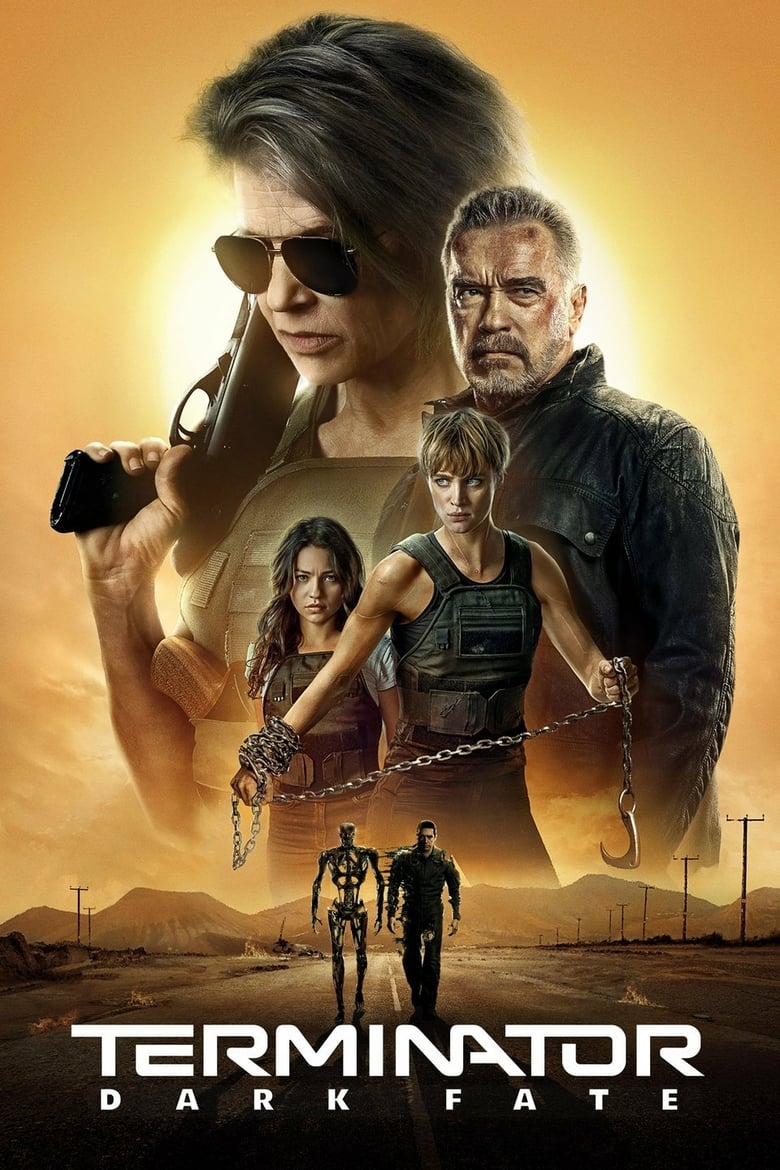 Sarah Connor returns in Terminator: Dark Fate. Even though she helped stop Judgement Day and the rise of Skynet, the life of Sarah Connor (Linda Hamilton) is struck by tragedy when one many T-800 (Arnold Schwarzenegger) Terminators sent back finds and kills her son John. More than two decades later, a new threat emerges in the form of the advanced Terminator Rev-9 (Gabriel Luna), which has the power to separate itself from its Endoskeleton to become two distinct Terminators. The Rev-9 targets Dani Ramos (Natalia Reyes), who plays an important role in the new dark future. A cybernetically enhanced super-soldier named Grace (Mackenzie Davis) is sent back to protect Dani and the two join up with Sarah Connor to try and stop the Rev-9.

While technically the sixth film in the franchise, Terminator: Dark Fate is a soft reboot that sees original director James Cameron return to produce a new sequel directed by Tim Miller (Deadpool) that ignores all the films that came out in the 28 years since Terminator 2: Judgement Day. The film brings back original star Linda Hamilton as Sarah Connor, who is now a Terminator hunting vigilante. She is joined by Grace, a soldier from the future with robotic implants, and Dani, who is the target of the latest Terminator. The group is eventually joined by an aged T-800, who has named himself Carl, to try and defeat the hard to kill Rev-9.

After the somewhat failed attempt at a reboot that was 2015’s Terminator: Genisys, James Cameron returns to the franchise he created in order to try and develop the definitive follow-up to Terminator 2: Judgement Day, completely ignoring the events of Terminator 3: Rise of the Machines and Terminator: Salvation. In this rebooted timeline, the rise of Skynet was indeed stopped, however, humanity still finds itself destined to a dark future ruled by a killer A.I. known as Legion, which also happens to have constructed Terminators to eliminate humanity.

It can be argued that most of the antagonists since Terminator 2 have been some sort of remix of the liquid metal shape-shifting of the T-1000. Gabriel Luna’s character of the Terminator Rev-9 is no exception to this, even though this Terminator has the added ability to be able to separate itself from its Endoskeleton, essentially becoming two foes at once.

While it can probably be said that Terminator: Dark Fate is the best film in the franchise since Terminator 2, it is also a sequel that is completely unnecessary. While it’s cool to see Arnold Schwarzenegger play The Terminator one last time, he really isn’t a factor in the plot until the third act, despite the fact that Schwarzenegger gets top billing in the film along with Linda Hamilton. Even though, Terminator: Dark Fate is an enjoyable ride, perhaps it is time to finally put this 35-year-old franchise to rest.