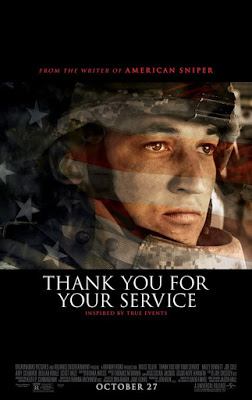 Iraqi veterans deal with the effects of PTSD in Thank You for Your Service. Sergeant Adam Schumann (Miles Teller) returns home from a tour in Iraq, along with with his comrades Solo Aieti (Beulah Koale) and Will Waller (Joe Cole). Soon after landing, Adam is confronted by Amanda Doster (Amy Schumer), who wants information on how her husband James (Brad Beyer) died. This deeply disturbs Adam, who tries to return to a normal life with his wife Saskia (Haley Bennett) and two kids. However, following the sudden and unexpected suicide of Will, Adam and Solo become deeply concerned about how their experiences in Iraq has affected their lives.

Thank You for Your Service is a biographical film based on the 2013 book of the same name by journalist David Finkel, with the book being adapted to the big screen by writer and first time director Jason Hall (American Sniper). The film tells the story of Sergeant Adam Schumann and his fellow servicemen, who begin feeling the effects of post-traumatic stress disorder after returning home from Iraq. The return home is the hardest on Will Waller, who finds that his fiance and daughter has left him, which eventually results in Will shooting himself in the head. This acts as a wake-up call of sorts for Adam and Solo, who begin to realize that they need some help to get over the effects of the war.

I have to admit that I was somewhat wary going into Thank You for Your Service, since the patriotic American imagery in the marketing made it seem to be a film of pro-war Americanism like American Sniper was. However, as it turns out, very little of Thank You for Your Service actually takes place in Iraq and the film is more about the effects of PTSD and how difficult it is for war veterans to get help. In fact, there is one poignant scene in the film, where Adam and Solo encounter an old commanding officer at the Veteran Affairs office and he almost reprimands them for seeking help, since it would appear as a sign of weakness for the younger soldiers.

Admittedly, Thank You for Your Service was a better film than I expected it to be, even though the film is a bit overly dramatic at times. I also have to make note of the almost distracting casting of Amy Schumer, in what I believe to be her first dramatic role, playing the small supporting role of Amanda Doster. While it’s probably not fair judging someone typically known as a comedian appearing in a drama, Schumer does stick out in her few appearances in the film, despite wearing a brunette wig that made her look surprisingly a lot like Melissa McCarthy.

While Thank You for Your Service is probably not a film that I would return to any time soon, it is still a somewhat decent look at the effects of PTSD.