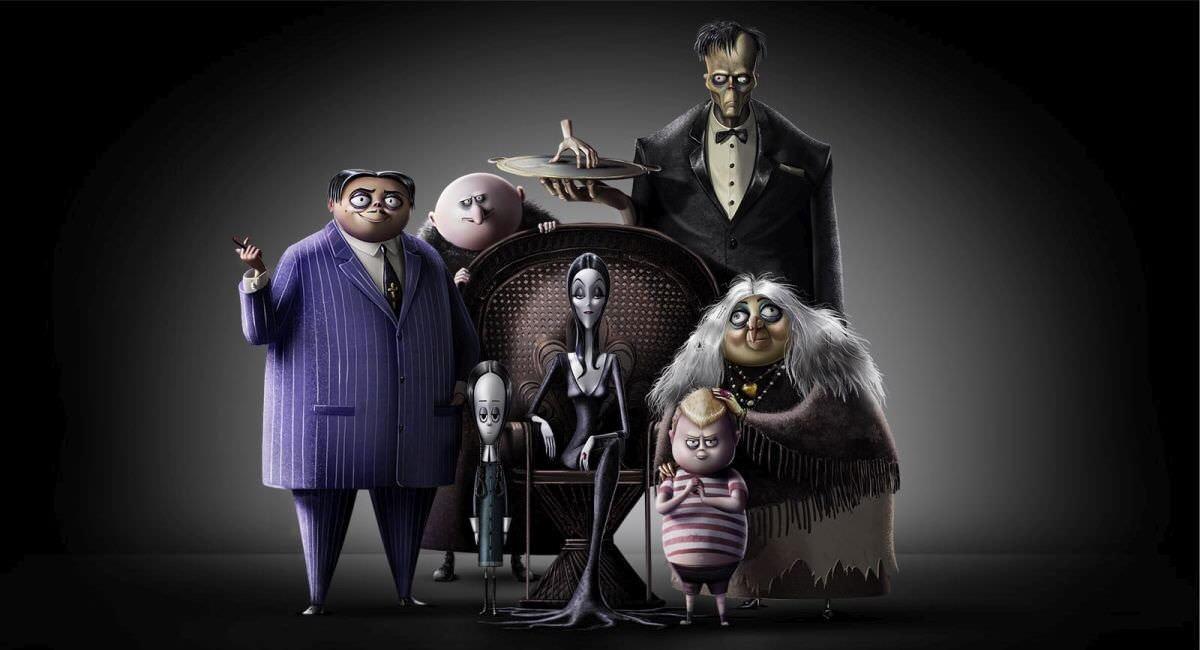 5.6
The Addams Family (2019) 1h 27min | Animation, Comedy, Family | 11 October 2019 (USA)
Director: Greg Tiernan, Conrad VernonWriters: Matt Lieberman, Charles AddamsStars: Oscar Isaac, Charlize Theron, Chloë Grace Moretz
Summary: An animated version of Charles Addams' series of cartoons about a peculiar, ghoulish family.
Countries: UK, Canada, USALanguages: English
Source: imdb.comDisclaimer: This plugin has been coded to automatically quote data from imdb.com. Not available for any other purpose. All showing data have a link to imdb.com. The user is responsible for any other use or change codes.

The creepy and kooky family return for a new animated adventure in The Addams Family. Following their wedding, Gomez (Oscar Isaac) and Morticia Addams (Charlize Theron) are forced by torch-wielding villagers out of the old country and have to find a new place to call home. Arriving in New Jersey, Gomez and Morticia take shelter in an abandoned insane asylum and adopt escaped patient Lurch (Conrad Vernon) as their butler. 13 years later, the Addams have two kids Wednesday (Chloë Grace Moretz) and Pugsly (Finn Wolfhard). With Pugsley having a major coming of age ceremony coming up, the family is soon joined by Gomez’s brother Fester (Nick Kroll), mother Grandma Addams (Bette Midler), and Cousin It (Snoop Dog). However, the party plans are disrupted by home improvement expert Margaux Needler (Alison Janney), who doesn’t want the Addams’ strange and macabre behaviour to disrupt the opening of her new town Assimilation.

The Addams Family is the latest adaptation of the “New Yorker” comic strip by Charles Addams, which has been the subject of many previous TV and film adaptations, most notably a pair of films directed by Barry Sonnenfeld in the early 1990s. This new animated film directed by Greg Tiernan and Conrad Vernon (Sausage Party) takes its visual inspiration directly from the original comic strip and casts Oscar Issac and Charlize Theron in the lead voice roles of Gomez and Morticia Addams. The main crux of the plot involves the difficulty Gomez and Morticia have with Wednesday and Pugsly, with Wednesday becoming curious about the world outside of the Addams mansion and Pugsly struggling with the preparations for his coming-of-age ceremony. In addition, the swamp surrounding the mansion has been drained and replaced with the town of Assimilation, built by Margaux Needler, who finds the Addams mansion on the hill to be an unwanted eyesore.

The Addams Family has been part of pop culture for over 80 years now, with Charles Addams’ original comic strip first being published by “The New Yorker” in 1938. This was followed by the 1964 TV series starring John Astin and Carolyn Jones and the pair of movies in 1991 and 1993 respectively starring Raul Julia, Anjelica Huston, and Christopher Lloyd. This new animated film for The Addams Family arrives two decades after the cancellation of the revival TV series The New Addams Family, which is the last we saw of the creepy and kooky family.

While the previous adaptations of The Addams Family are undoubtedly better than this new film, I will say that this animated adventure does a decent job of reintroducing the family for modern audiences. The Addams Family is at its best when it is focusing on the macabre nature of the family. Both Oscar Issac and Charlize Theron are perfectly as Gomez and Morticia and Chloë Grace Moretz also shines as Wednesday, with her performance obviously inspired by Christina Ricci’s breakthrough in the 1990s films. I could give or take Finn Wolfhard (Stranger Things) as Pugsly, though at least it’s not as a bad a casting choice as it was crediting Snoop Dog as Cousin It since the character’s major trait is that he speaks complete gibberish.

While The Addams Family does fall into some of the plot trappings of other modern animated films, such as the inclusion of a “be yourself” message, it is still a cute and kooky animated adventure for the family.