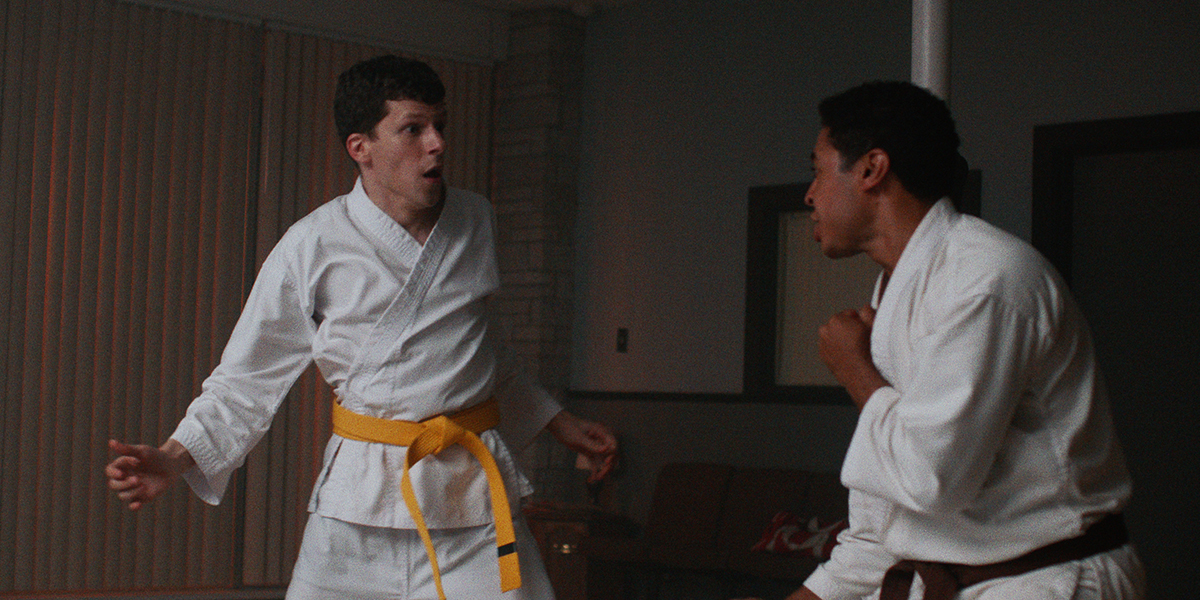 7.4
The Art of Self-Defense (2019) 1h 44min | Comedy, Drama, Sport | 13 September 2019 (Mexico)
Director: Riley StearnsWriters: Riley StearnsStars: Jesse Eisenberg, Alessandro Nivola, Imogen Poots
Summary: A man is attacked at random on the street. He enlists at a local dojo, led by a charismatic and mysterious sensei, in an effort to learn how to defend himself.
Countries: USALanguages: English, French, German
Source: imdb.comDisclaimer: This plugin has been coded to automatically quote data from imdb.com. Not available for any other purpose. All showing data have a link to imdb.com. The user is responsible for any other use or change codes.

A meek accountant joins an unorthodox karate dojo following a mugging in The Art of Self-Defense. Casey Davies (Jesse Eisenberg) is an accountant, who one night gets mugged and beaten by a group of bikers. Fearful about his safety, Casey signs up at a local karate dojo, run by a somewhat unorthodox Sensei (Alessandro Nivola). Despite some confrontations with the dojo’s lone female member Anna (Imogen Poots), Casey quickly rises to yellow belt rank and is invited by Sensei to participate in the dojo’s night classes. It is there Casey discovers that he has stepped into a much more darker and violent environment than he has signed up for.

The Art of Self-Defense is the sophomore feature film from writer/director Riley Stearns (Faults, The Cub). A very simplistic definition of this dark comedy is that the film is like Fight Club within a karate dojo. While Sensai initially appears as if he is truly trying to help Casey, he is soon revealed as a quite manipulative and shady individual, who is also quite misogynistic, which prevents his oldest pupal Anna from earning her black belt, even if she is the most skilled fighter in the dojo.

The strength of The Art of Self-Defense is how the film is able to balance its awkward comedy with an increasingly dark plot. The comparisons of the film to Fight Club are apt since it is revealed that the dojo’s night classes are violent and bloody affairs. The film also plays around with the typical meek characters Jesse Eisenberg plays, since Casey is shown to become a lot more self-confident as the film progresses, even if he also picks up the habit of punching people in the throat. Even though she doesn’t really become central to the plot until the second half, the film also features a solid performance by Imogen Poots as Anna, who constantly has to deal with the misogynistic atmosphere at the dojo. Then there’s Alessandro Nivola as Sensai, who you start off admiring, but slowly come to despise as the film progresses.

I have been a growing fan of Riley Stearns since I saw his excellent short film The Cub a number of years ago, with his 2014 feature debut Faults also being a quite solid dark comedy. The Art of Self-Defense demonstrates how much Stearns has grown as a filmmaker and I will definitely be interested in checking out anything that he makes in the future.